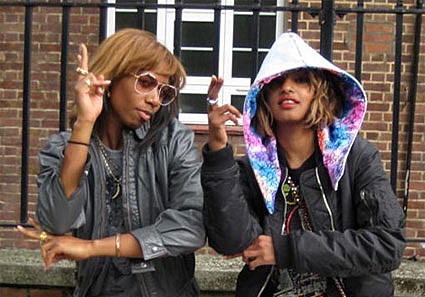 It’s been a happy New Year for Rolling Stone “Artist to Watch” Santogold (née Santi White), who just returned from a British tour with M.I.A. to see herself on the cover of this month’s Fader. What sort of challenges might 2008 bring? “I do these detoxes where for 20 or 30 days I can only eat organic fruits or vegetables,” she says. “It makes you not even really be able to eat greasy food — you can, but it feels disgusting. By the end of the year [after not doing the detox for a while], I tend to crave fried food and chocolate all the time.” That doesn’t mean you’ll find her eating cheesesteaks like she did growing up in Philly (she now lives in Bed Stuy and has been a pescatarian for twelve years), but this week she did hit the vending machine at the Soho studio where she’s recording her debut self-titled album, out in April. [NY Magazine]

And, M.I.A. is the new Marc Jacobs model.