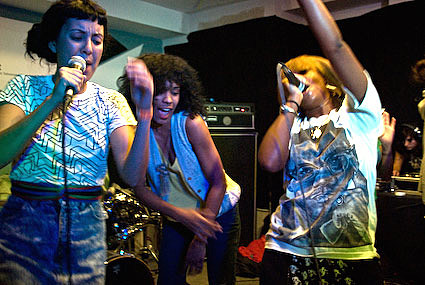 Santogold (a nickname she got from a classmate back in the '80's for her sister-girl style) is a project that's all about Santi: new band, programmed beats, tons of reggae influences, an impressive list of producers and collaborators, all spiked with Whites's varying vocal styles. In her new song "LES Artistes" she addresses the way folks tend to front like they're something they're not. "I'm an old school artist," she says. "I don't care about looking the part all the time, and in the modern entertainer world it's all about looking the part. In fact, you don't even have to have anything beyond that. If you look the part then you are the part. I just can't be bothered half the time." [FADER]

Why did it take me this long to post about one of my favorite shows of 2007 - the artist I left CMJ this year feeling most excited about? I don't know. RSVP to see Santogold, White Williams (what else is new), Rapture DJs, and DJ David Bruno - for free tonight (Dec 13) at the Music Hall of Williamsburg in Brooklyn. More photos of Santogold at the FADER party (Oct 20, 2007), below.... 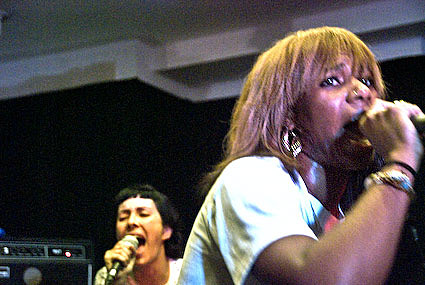 Martin Heath of Lizard King– the label that signed and developed the Killers– spotted White at a Stiffed show. They met up and he gave her the go ahead for an EP, and later a full length. "I appreciate him," White says of Heath. "He's a music guy–he's not from New York and he doesn't necessarily fit in with the music people here, but that's what it takes sometimes to get some good shit going." It took a minute to convince Heath to let White completely control her entire project, but he came around after a bit of coaxing (and some not so good pairings with pop producers). [FADER] 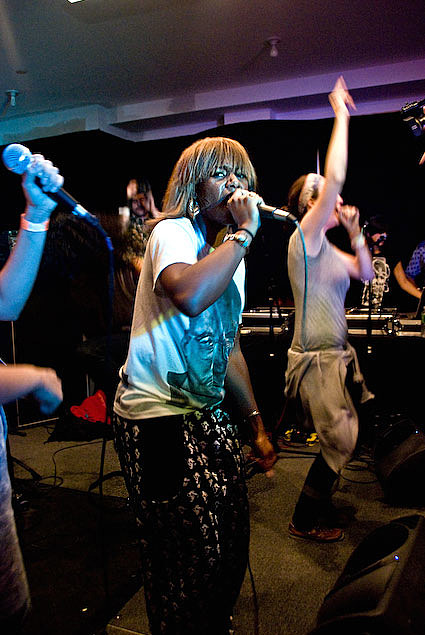 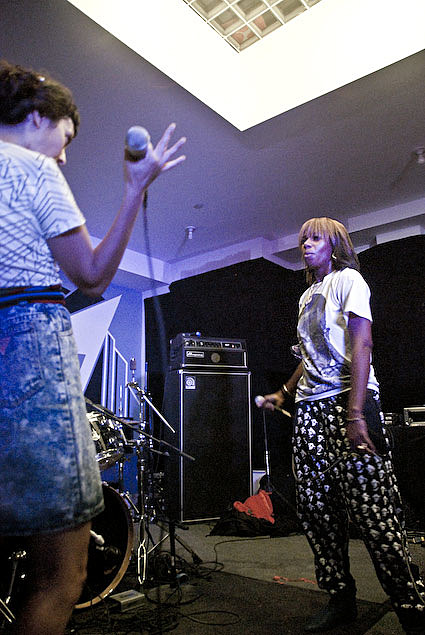 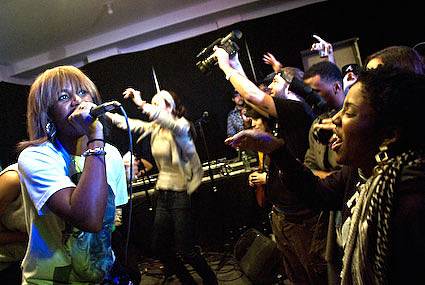 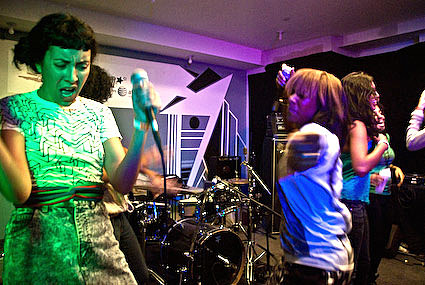 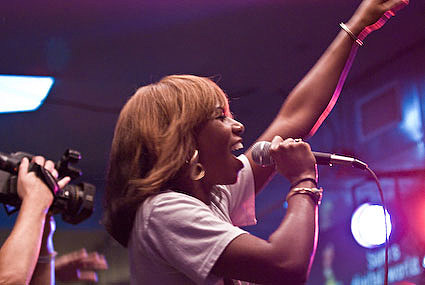 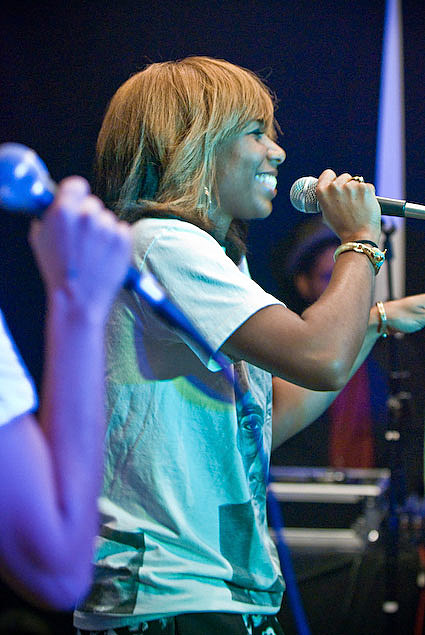 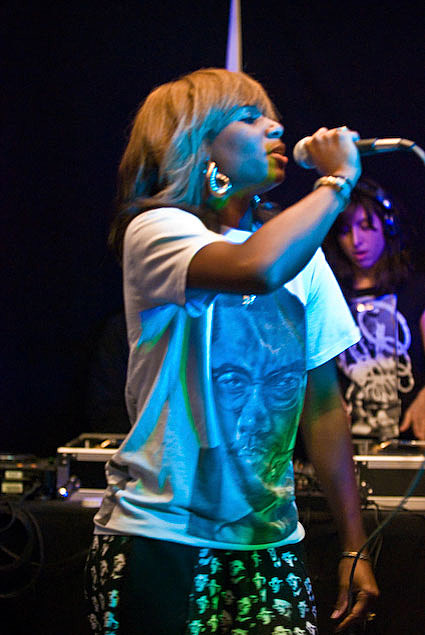 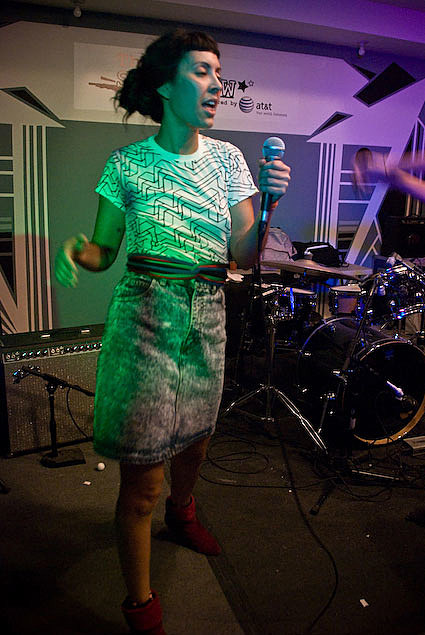 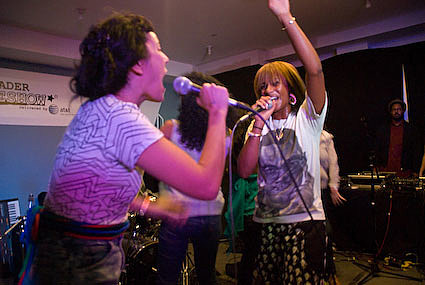 White was eventually left to her own devices, so she teamed up with producers including FreQNasty, Switch, Disco D, Spankrock's Naeem and XXXchange and others. John Hill, who is also a former member of Stiffed, was her partner thoughout the project, and together they assembled the album in three weeks. Talks of crazy dance party-inducing shows and more collaborations have left White fearless for her solo project. "Now that I'm by myself," she says, "I'm not by myself, which is good." [FADER] 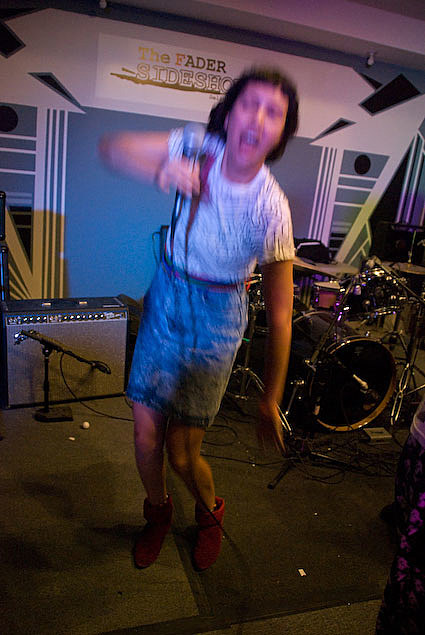 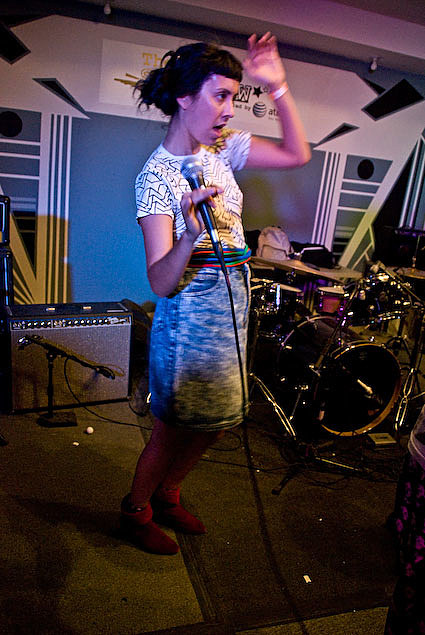 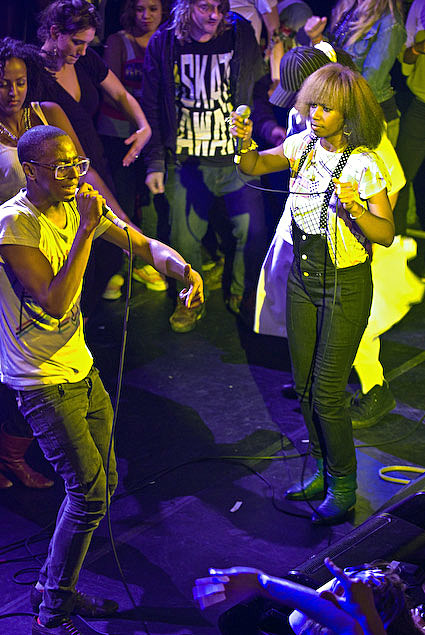 Santogold also recently played with Bjork, with Mark Ronson, and with Spank Rock at the mtvU awards.

Santogold on her own (when I saw her - see pics above), is her, and her singing & dancing partner who added to the show equally, and the DJ. They were so good. If you don't like Spank Rock, DON'T HOLD HIM AGAINST HER (also, she is not an M.I.A. ripoff). I'm excited for tonight.

(some of the above photos were taken by Jefferson.)