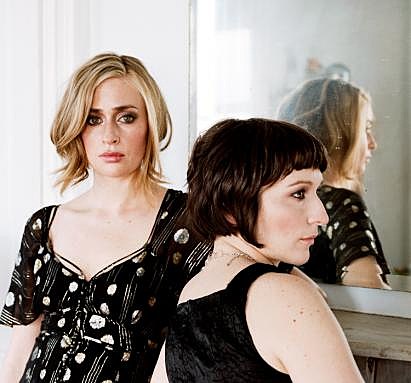 This very special evening will take place on Saturday, April 3rd at the Bell House in Brooklyn. Check out one song from each, above. Tickets are on sale.

The show is the only chance to hear Penelope performed live by Shara and Signal any time soon. They promise it won't happen again until at least after the album comes out in August which is probably around the time that Shara Worden also officially becomes a mom. Shara's recent busy-while-pregnant schedule has included sets with Clogs and her own band, My Brightest Diamond, at Big Ears, as well as a surprise appearance with Regina Spektor (and Nicole Atkins) at Irving Plaza.

"Regina Spektor was joined on stage for duets with Only Son's Jack Dishel, who beatboxed the h-e-double hockey sticks out of "Hotel Song." Jersey native, Nicole Atkins, sang her heart out choosing a new song, "Towers," over the audience requested favorite, "Neptune City." Shara Worden (My Brightest Diamond) rocked while timing her "pregnancy breaths" into performances of "Inside a Boy" and "Feeling Good." Spektor delighted fans with favorites like "Après Moi," "Us," "Blue Lips," On the Radio," "Fidelity," "Better," "Music Box," "Eet," and "Laughing With." Her rendition (lyrics in hand) of "Hallelujah" was hauntingly gorgeous. She ended the evening with "Samson" and graciously thanked her string section, all the performers, and the audience for supporting such an important cause." [quasihip]

Congrats to Shara and her husband. Videos from that show along with more info on the pieces being performed Saturday, below...

New Amsterdam at the Bell House

Sarah Kirkland Snider's PENELOPE is a haunting 60-minute song cycle for female voice, chamber orchestra, and electronics that straddles the fine boundaries between art song, chamber folk and post-rock. PENELOPE features an all-star cast, including the astonishing vocalist Shara Worden (of indie band My Brightest Diamond) and the "new-music supergroup" Signal, led by acclaimed conductor Brad Lubman. Derived from a multimedia-theater piece co-created by Snider and acclaimed playwright Ellen McLaughlin, PENELOPE centers on a woman whose long-missing former husband turns up at her door, traumatized by two decades spent in an unnamed war. To restore his memory, the woman reads aloud from Homer's "Odyssey." The New York Times praised the work for having "an elegiac quality that deftly evoked sensations of abandonment, agitation, grief and reconciliation...ably [demonstrating] the poised elegance of Ms. Snider's writing."