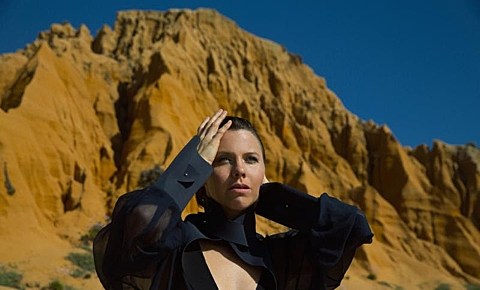 Arcade Fire violinist Sarah Neufeld is releasing her second solo album The Ridge in February, and she'll begin a tour in support of it in March. Joining her on drums and electronics is Stefan Schneider, who's played with Sarah in Bell Orchestre (and was also in The Luyas). Opening the tour will be Eartheater (aka Alexandra Drewchin of Guardian Alien), whose second album of 2015, RIP Chrysalis, Sarah calls "an enchanting work of art." It also just ended up on Gorilla vs Bear's year-end list (stream it below).

The tour wraps up in NYC on April 15 at Le Poisson Rouge. Tickets for that show will be on sale soon. All dates are listed below.

Before the tour begins, Sarah plays NYC's Winter Jazzfest in January. As does Colin Stetson, who Sarah released a collaborative album with earlier this year. Colin also plays NYC tonight (12/2).

All dates are listed, with a stream of The Ridge's title track and that Eartheater album, below...