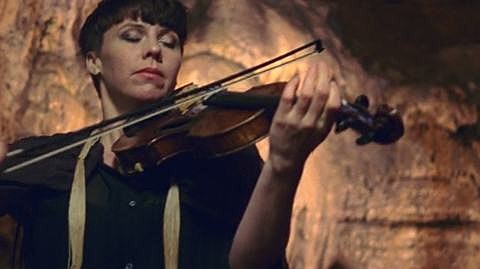 Arcade Fire and Belle Orchestre violinist Sarah Neufeld released her new album of instrumental compositions, Hero Brother, last month via Constellation Records. You can stream the whole record below. When playing solo violin work, having a room with good acoustics can be as intrinsic as the performance and in the case of this live video, both are pretty spectacular. Working with director Tracy Maurice, she performs "Tower" 156 feet below the earth at Howe Caverns in Schoharie County, NY. Maurice, who also shot the cover art there, says:

I had worked with Sarah before when I did the artwork for Funeral, Neon Bible and the first Bell Orchestre album. I was really exciting for me to work with her on her solo project and to have the chance to collaborate with her/ to interpret her singular vision. The textures/feeling of the cave really complimented the sound, the haunting echos/vocals, oscillating between ambient and raw energy...something both powerful and vulnerable that I love about her work.

We've got the premiere of that video in this post and you can watch it below.

Meahwhile you can catch Neufeld live in NYC when she opens for Porcelain Raft on October 4 at Mercury Lounge. Tickets to that show are still available. This is her only upcoming date. She'll soon be very busy with Arcade Fire, though, probably, as their much-anticipated new album, Reflektor, comes out October 29.