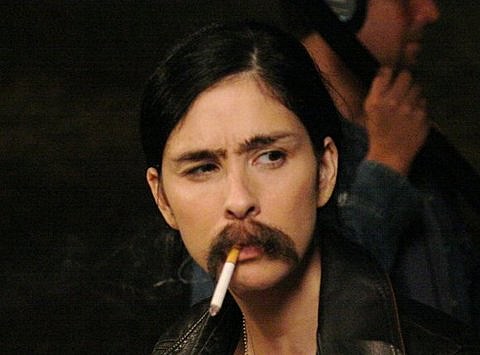 I am pretty sure the last time I saw the great Sarah Silverman in the flesh was when Todd Barry was celebrating his 20th anniversary as a stand up comedian at Union Hall on November 1, 2007. I thought about that evening recently as I sold the Thin Lizzy t-shirt I was wearing that night on eBay last week because I got too fat for it. Now some dufus in Tokyo owns it. Anyhow, turns out, Sarah's back in town! Thin Lizzy pun! Sarah has a shit-ton of NYC appearances on the horizon, so get out your Palm Pilots and styli out and make note!

Your first chance to see her is on Wednesday September 12 at 8 PM at BAM as part of the great comedy series Get it Out There. This event is FREE(!) and also features Katina Corrao, The Lucas Brothers, Brent Sullivan. This show can only accomodate 300 guests, so get there before 8 PM doors. Show starts at 9 PM. And as a brief aside, Brent Sullivan is one of my favorite, grossly not-famous-enough local comedians in the biz and author of one of the funniest jokes I've ever heard. This show is gonna be PACKED, so let me reiterate GET THERE EARLY.

You can also catch Sarah on Friday September 14 at The Bell House as part of the 2012 Eugene Mirman Comedy Festival. That evening's show, Startalk LIVE! with Neil Degrasse Tyson sold out like minutes after we initially mentioned it which totally sucks, but is also great for Neil, the venue, the folks who managed to get a ticket. But keep your eyes on ticketweb, craigslist, eBay, twitter, and the book of faces because you never know if and when a ticket or two might become available.

Speaking of Friday September 14th... Friday September 14 is the day that Mac-loving, bespectacled, super-intellectual white New Yorkers clamor for tickets to the 2012 New Yorker Festival which happens to feature an appearance by the great and just talked about Sarah Silverman which happens on Saturday October 6 at 10 PM where she will be in conversation with the insufferable Andy Borowitz at the Directors Guild Theatre on 57th street. This years's fest features other cool stuff which we've already covered, but for an even more detailed look at the fest's offerings, have a gander at this printable event guide.

ALMOST one month to the day following Startalk (mentioned above) Sarah will be back in town again! On Thursday October 11 people with $400 or more to burn can catch Sarah Silverman as part of the epic event On The Chopping Block: A Roast of Anthony Bourdain. Hosts Mario Batali and Willie Geist will be joined by an incredible roster of roasters including the absolutely vile and violent-outburst-inducing Guy Fieri, Gilbert Gottfried, Artie Lange, Marc Maron, Jim Norton, and a special appearance by Sarah Silverman. I am not a foodie and think that having channels and channels of programming devoted to food in a world where millions go to bed hungry is the ultimate in vanity deserving of eternal hellfire... yet, I love Anthony Bourdain. He is funny, can't say no to a drink, and seems like the coolest travel buddy of all time (just like me!). This event takes place at Pier Sixty - Chelsea Piers, West 23rd Street at Eleventh Avenue and is part of a MUCH LARGER New York City Wine & Food Festival. I so badly want to see this. Anyone need a date?

Sarah Silverman also gets totally naked in the movie Take This Waltz. So there you go.