The following review of Day 1 (May 26, 2007) of the 2007 Sasquatch! Festival in George, Washington is brought to you by Jerry Yeti exclusively for BrooklynVegan.com 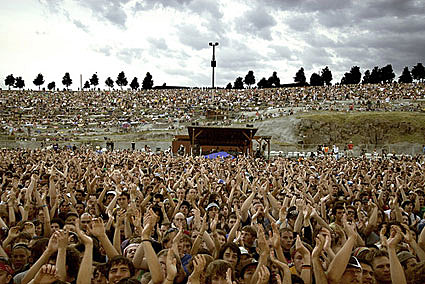 For the second consecutive year, strange natural phenomena have marred Sasquatch Festival. This year's mysterious force - Wind - cut short the Polyphonic Spree on Sunday, and silenced the music at the main stage for nearly three and a half hours. As the other stages continued onward, the remaining bands condensed their sets - Interpol so much so that they finished 10 minutes before scheduled. We didn't see all the bands we wanted to - probably the most saddened by the early start times of the Hold Steady and the Blow, but we took in a wider variety than expected. 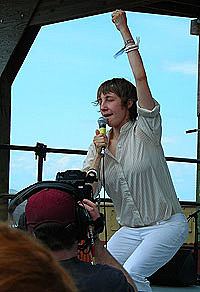 Saturday was looking like it would be a Day of Duos kicking off with the Blow, but the Two Gallants immediately shattered that dream by becoming the Two-and-a-Half Gallants. That is, with the addition of a partial? third member. We had better luck with Portland's own Viva Voce, who stayed true to the coupling idea and brought some serious rock to the Yeti stage. Percussive, tight, and [as my scribbled handwriting noted] "They Rocked." Anita Robinson has some serious skills on the frets, as her husband does with the sticks. I had forgotten how catchy their album "Get Yr Blood Sucked Out" is. They stuck to most of its material as they finally finished the tour. Over at the main stage, Neko Case, lingerie model extraordinaire, was similarly focusing on songs off the her latest not-so-recent album and included her cover of Bob Dylan's "Buckets of Rain." Sporting some shades in a gesture that spited the clouds that would not, could not hail nor storm, her voice resonated strong enough to the sunstroke folks below. 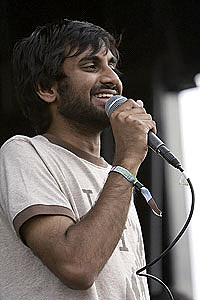 We weren't the only ones fashionably late to the first day of the festival. Comedian and MC Aziz Ansari missed his flight the night before, but arrived at the Wookie stage right in time for Ghostland Observatory. Battling house music, Aziz got a few jokes off successfully before the crowd began to turn restless. Seattle crowds are pretty rough I guess. Sarah Silverman had even less luck at the main stage. Yikes.

As it turns out, Ghostland Observatory are a big deal in Seattle. Thanks to KEXP, the duo -a true one at that- became a mandatory experience and the attendance at the Wookie Stage showed. Always fashionable Aaron Behrens led us through an energy injected performance highlighted with "Sad Sad City," eventually blowing the power out on the entire stage. Of course they did. With that, things were starting to really get going. After all, Aziz had arrived.... 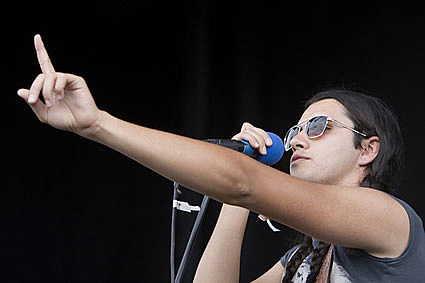 Meanwhile...Aziz's crush had not. Back at the main stage, John Roderick had some small feet for some big shoes, filling in for both visa-troubled M.I.A. who was A.W.O.L P.O.W.... not in attendance... and a bombing Silverman. At least Roderick will be funny as usual, right? Unfortunately he didn't banter enough to be both musician and comedian. The Long Winters, aka the band, simply didn't hit the right tones either and while "Stupid" played stunningly, the rest seemed too small. We'll give them a pass this round, because we really do like them. 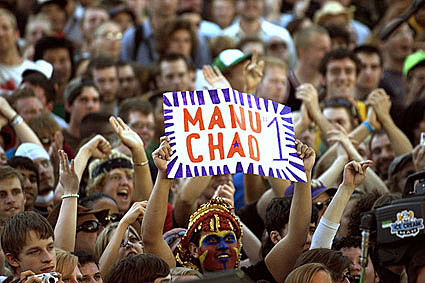 Neglecting the Beastie Boys instrumental set -which turned out to be not so entirely instrumental at all, dang it- we hung around for festivities supplied by Manu Chao. Bringing some blazing Spanish guitar, people seemed to really enjoy Manu Chao and we caught on to the over all vibe. He fed off this reaction and played well over his time slot. No one seemed to mind. At least we were keeping warm. When the sun goes down at the Gorge, the mercury drops like lead. Leaded mercury. It's very unsafe.

Then came Arcade Fire. Once the highlight of Sasquatch 2005, they quickly became the highlight of 2007. With a well-balanced set of equal parts Neon Bible & Funeral, they sounded larger than ever and filled the vastness behind them while leaving us breathless and insatiable. At the top of our lungs, we belted along to "Wake Up" into the black emptiness above, ... "a gorgefull" of people as Win Butler said. It may give us chills every time, but the first few dozen bars of "Rebellion (Lies)" is still immensely powerful coming out of "Power Out." And not being able to resist a political jab or two, Win dedicated "Antichrist Television Blues" to Jerry Falwell. But it ended all too soon. For them alone I would return again. 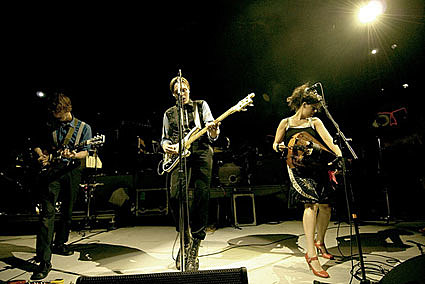 And yet it wasn't over for Bjork fans. We cut the night short a few songs into her set, and even though this Yeti isn't a fan, I was impressed. I even found myself wishing I was a fan so I could justify freezing and being miserable.

If only it wasn't so cold. We'd be better prepared for Sunday, or so we thought. That to come in a minute...