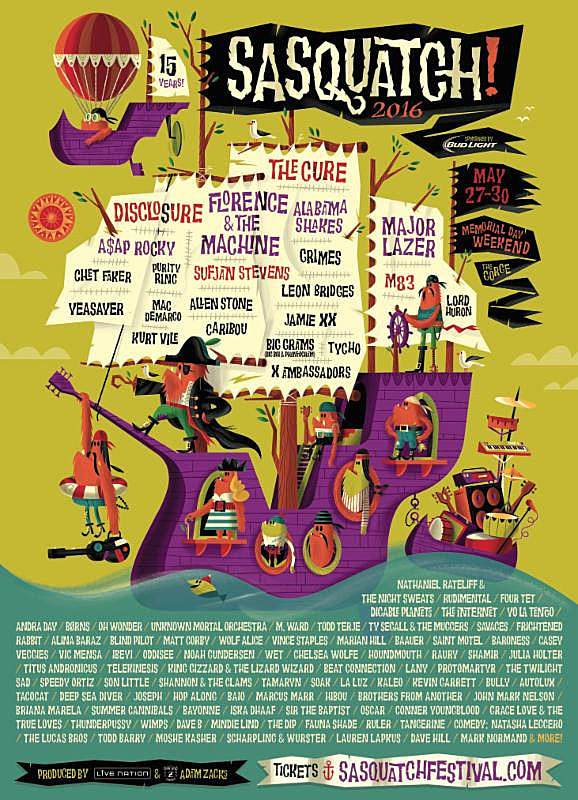 Festival creator Adam Zacks and Live Nation have announced the schedule for the Sasquatch! Music Festival, taking place May 27th - 30th, with over 120 artists including performances by The Cure, Florence & The Machine, Disclosure, Major Lazer, Alabama Shakes, A$AP Rocky, Sufjan Stevens, M83, Grimes, Chet Faker, and Jamie xx. Created by Adam Zacks in 2002, the festival's stellar lineups have featured a blend of established and emerging artists at the stunning Gorge Amphitheatre set atop the cliffs overlooking the Columbia River, making this festival an international destination as well as a uniquely Pacific Northwest mainstay. Visit www.sasquatchfestival.com for more info. "

On Friday A$AP Rocky's set overlaps with Vince Staples a bit, especially unfortunate since they are like two of the only hip hop artists on the lineup. On Saturday don't forget that Preoccupations is the band formerly known as Viet Cong, but good luck seeing both them and M83. M Ward on at the same time as Hop Along. Ty Segall on at the same time as Protomartyr. All unfortunate. Big Cure fans will have to completely skip Big Grams on Sunday. Comedian Dave Hill is on at the same time as "Wimps", though I wouldn't call anybody a wimp that is brave enough to go head to head with Dave. Monday (this is a four day fest) makes it near impossible to see both the great Sufjan Stevens and the great Chelsea Wolfe. Check out the full schedule for more.