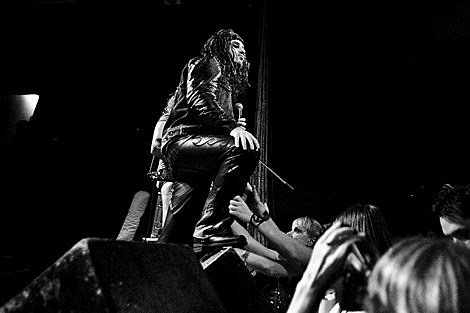 After the wild ride of the early noughties, Satanicide finally called it quits. Devlin went on to become one of Rock's top photographers, under the alias Dale May. And Aleister, under the alias Phil Costello, went on to form Tragedy: All Metal Tribute to the Bee Gees, and Diamondsnake (with Moby).

Fast forward to 2016. Satanicide is back with live shows and a new record in the works. Joining Devlin and Aleister are their bandmates Sloth Vader (drums) and the Baron Klaus von Goaten IV (bass).

The band's old motto, "Never has so much cock graced a single stage," remains true to this day. That is largely because their cocks are older, wiser, and possibly even longer. Look out for Satanicide at a Lower East Side hipster club near you!

As the above quote from their website points out, NYC's mock-hair metal band Satanicide are back in action this year. So far they've announced one Lower East Side hipster club date, Mercury Lounge on March 17 with Les Sans Culottes. Tickets for that show are on AmEx presale now, and the general on-sale starts Friday (1/22) at noon.

It's their only announced date at the moment. Listen to their cover of Celine Dion's "My Heart Will Go On" and watch a video of them at Irving Plaza in 2008, below...