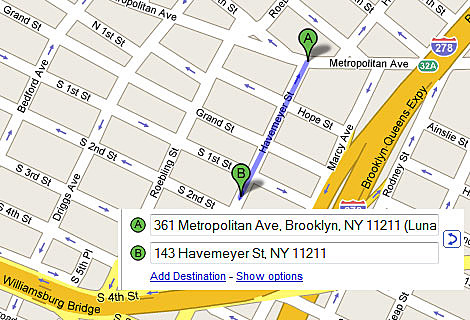 As reported earlier in the year, the Knitting Factory has plans to move from its Tribeca location into the ex-Luna Lounge space in Williamsburg. The Tribeca venue had a "final show" with Akron/Family on New Years Eve. Since then, it has reopened in the same spot, where it has shows scheduled through mid-summer when its Manhattan lease is up (including BLK JKS on June 2nd).

Some are speculating about the status of that move, which seems to have been stalled somewhat...

I was by [the old Luna Lounge / future Knitting Factory space] last weekend and it doesn't look like any work has been done and the exterior looked bad. A couple months ago, this place looked "kept up". There were flyers for shows at the Knitting Factory in the display cases, the building walls were clean, etc. The display cases are now gone and the walls are covered with graffiti. You have to wonder if this move is really taking place. The Knitting Factory has shows booked in the "old location" through July and this is completely contradictory to the "closing in January, reopening in Williamsburg in March" story that was going around last year. [Brooklyn Rocks, May 5th, 2009]

Back in January, Rob Sacher of the Luna Lounge described his plans to open another bar, Satellite Lounge, around the corner from the closed club. He wrote:

The Satellite Lounge will hold about 60-75 people. You'll be able to hear plenty of current indie rock as well as lots of favorite older stuff from many of the previous music scenes from the last twenty years. It will not have 'live' music...We will be doing CD listening parties, birthday events, and be open seven days per week.

This weekend, starting Friday May 8th, Satellite Lounge will have its grang opening celebration. Details below...

In the Williamsburg section of Brooklyn, New York
Friday, May 8th at 10PM
and
Saturday, May 9th at 10PM