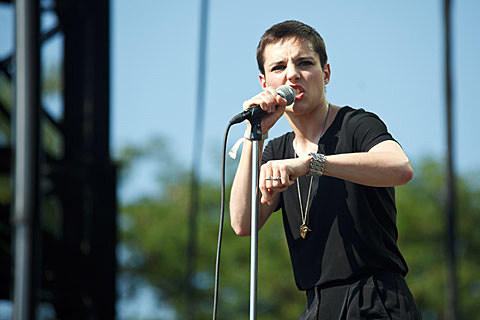 The wildly intense post-punk revivalists Savages are kicking off a North American tour this September, and though that was initially supposed to hit NYC on September 12 at Terminal 5, the Terminal 5 date has been moved to October 16. Tickets are available for the new date, and all tickets purchased for the 9/12 date will be honored. If you can't make it on the new date, refunds are available too.

Still no opener announced for the T5 show, but Mark Lanegan collaborator Duke Garwood will be opening many of the other North American dates.

Savages are also taking part in the Station to Station tour, and it's been announced that they'll play the Oakland stop on 9/28 with Dan Deacon, Sun Araw & The Congos, Lia Ices, Twin Shadow, No Age, and more (tickets).

Updated dates are listed, along with a video of the band at Pitchfork Fest, below...