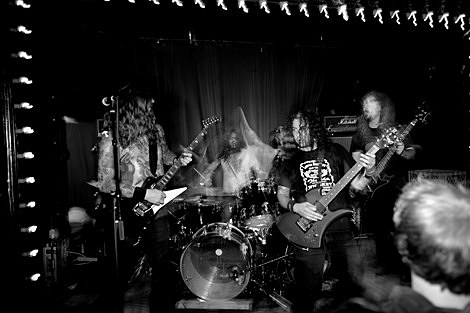 Saviours have been added to all three previously announced Saint Vitus dates, which include Europa on 10/16 (tix). In addition, the band will play Summerstage for FREE on Aug 16th with Dinosaur Jr and The Walkmen.

Saviours have also jumped on the previously discussed Kylesa tour, replacing Doomriders who can't make it due to Nate Newton's commitments with Converge (meaning, their impending tour with Mastodon & High On Fire):

"We've gotten alot of messages regarding our dropping off of the Kylesa tour and yes....unfortuately the news is true. Due to scheduling issues between Doomriders and Nate's other band, Converge, we had to pull out of the tour. Our deepest apologies go out to our friends in Kylesa, and also to anyone who had planned on coming to see us play on the tour. We love Kylesa, and we love our brothers in Saviours who have taken our spot on the tour and encourage everyone to go to these shows and have a blast! It's going to be a great tour and we're all very sad that we won't be a part of it. We will hopefully be announcing some exciting tour plans for later in the year very soon. We're sorry everyone! We'll see you next time!" -[Lambgoat]

Saviours new album, Accelerated Living, is due out on CD and 2LP via Kemado on 10/27. All dates below...