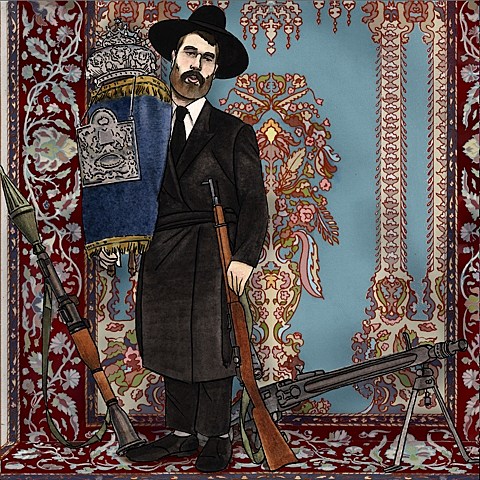 How many albums do you know of that feature guest appearances from two pioneers of emo, one of the finest vocalists in modern-day post-hardcore, two members of a certain Welsh indie pop collective, a shapeshifting art rocker, and one of the biggest pop punk frontmen of all time? Still counting? Well you can add the new Say Anything album, Hebrews (due out 6/10 via Equal Vision), to your list. Max Bemis & co.'s new album features the lead singers of The Get Up KIds, Braid, Touche Amore, Los Campesinos!, mewithoutYou and blink-182, not to mention The Front Bottoms, Manchester Orchestra, Saves the Day, Balance & Composure and still more. Oh, and don't forget Say Anything family members Eisley.

Hebrews is Say Anything's sixth full length album and second on Equal Vision since leaving their major label. And like most of their recent releases, it faces the potential doom of living in the shadow of 2004's ...Is A Real Boy. When that album came out (and even more so when it really broke in 2006 when J reissued it and "Alive with the Glory of Love" was released as a single), it came as a breath of fresh air for the pop punk/emo world which was largely in its unfortunate mallcore phase. To quote The Progress from that same year, it was just similar haircuts with different names. But ...Is A Real Boy, which was only vaguely pop punk or emo, broke from that mold while still being associated with it. The album combined the unconventional with the conventional, let no song by without various bridges and unpredictable changes, and was filled with unstoppable ambition. It makes sense that the veterans of the genre want to be on his new album but trash many other bands that came in their wake.

Anytime a breakthrough is that ambitious and that successful, following it up becomes a treacherous task, and audiences will judge every move you make. Max, always one to be self-aware (see "Admit It!!!"), ahem, admits it on the new album's track "Lost My Touch," which premieres in this post. "Some say I've lost my touch at crafting Say Anything songs," begins Max, before addressing younger musicians on how they can take his place: "Just string together lines of smug self-loathing bile." It sounds tongue-in-cheek but also incredibly earnest, a somber piano ballad version of what made the more aggressive "Admit It!!!" so compelling. And at the end of the song, he brings in Touche Amore frontman Jeremy Bolm to provide a very Touche Amore-like verse, the kind that anyone who's ever connected with TA's own piano ballad, "Condolences," should find rewarding. The great irony by the end of it is you realize Max has crafted a pretty damn good Say Anything song.

As previously mentioned, Say Anything is going on tour with some pretty great openers, The Front Bottoms (who have a new EP coming), The So So Glos and You Blew it!. That tour hits NYC on June 28 at Best Buy Theater. Tickets for that show are still available.

Song stream and LP tracklist below...

And here's the song with Los Campesinos!...