DJ Shadow at Brooklyn Bowl in 2012 (more by Robert Altman) 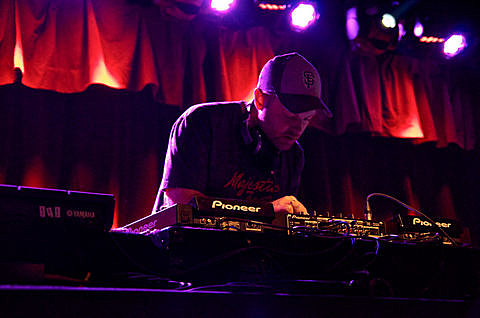 As mentioned, there's a weekly Thursday party called INPUT at new Williamsburg dance club Output (74 Wythe Ave by N. 12th St.) which has already had some good shows, and has another this week (3/21) with Bok Bok, Kingdom, Girl Unit, L-Vis 1990, MikeQ, Rizzla, and Kelela. They've just recently announced their April parties, and those are looking pretty good too.

On April 4, they've got DFA DJs Juan MacLean and Tim Sweeney, along with Dan Wender. Tickets for that one are on sale now.

Then on April 11, DJ Shadow will take over the venue for an All Basses Covered DJ set. Tickets are on sale.

The last announced INPUT party for April at the moment (they haven't announced a 4/25 show) is on April 18 with Ben UFO, Pearson Sound, and Pangaea. Tickets are on sale. And if you haven't already, check out Ben UFO's Fabriclive.67 mix.

And probably the biggest show to be announced at Output yet happens on August 1 when SBTRKT (who has headlined Terminal 5) DJs there. Tickets for that one are on sale now.

Listen to "Ghost" from Kilo Kish's mixtape which features production from SBTRKT below...