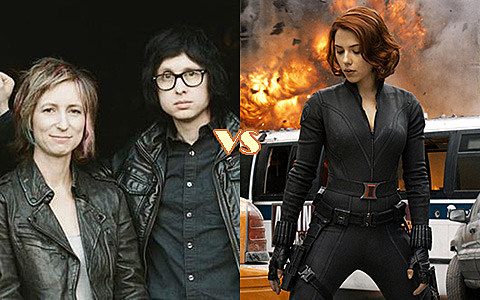 You may remember that Scarlett Johansson has a "girl group" called The Singles that also features Holly Miranda, Este Haim and more. Trouble is, there's already a band called The Singles who were formed in Detroit by Vincent Frederick back in 1999 and continue to make records, like last year's Look How Fast A Heart Can Break. Frederick has hired legal counsel who have in turn issued a cease and desist demand to the representatives for Johansson and the new all-girl group, alleging trademark infringement and a variety of other legal claims. Says Frederick:

I don't understand it. Our band, The Singles, has an account on nearly all social media sites and our music is available in record shops, on iTunes, SoundCloud, and other websites. Just a simple search on Google would have revealed that 'The Singles' was already a band name being used by another pop/rock band - our band.

Interestingly, when news of Johansson's band first surfaced two years ago, it was to be called The One & Only Singles. If Frederick needs further legal help, we hear Saul Goodman knows a thing or two about brand infringement.