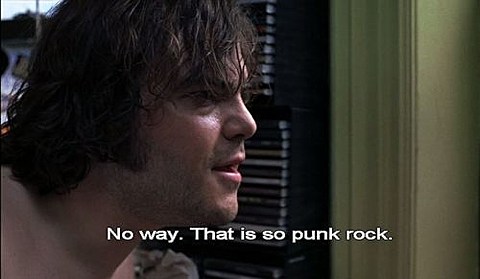 Everyone's favorite movie about fourth-grade rock stars, School of Rock, is coming to Broadway in 2015, reports The Hollywood Reporter. The Richard Linklater-directed, Jack Black-starring film is getting a musical makeover courtesy of Jesus Christ Superstar/Phantom of the Opera/etc composer Andrew Lloyd Webber, and he'll be getting some help from Green Day producer Rob Cavallo too. Laurence Connor is directing the show, and Glenn Slater is handling lyrics. It's gonna be a really tough project, you're gonna have to use your head, your brain and your mind too.

Rolling Stone points out that Webber had the following to say:

It is a joy for me to return to my Jesus Christ Superstar roots. When Deep Purple's Ian Gillan was recording Jesus for Tim Rice and me at London's Olympic Studios, Led Zeppelin was recording next door and a glimpse of a Stone or two was routine! School of Rock is hugely about how music can empower kids.

Previews will begin on November 2 at the Winter Garden Theatre, and it's scheduled to officially open on December 6.

School of Rock is also getting a TV adaptation, which is scheduled to air this spring on Nickelodeon. Linklater's executive producing the show with School of Rock producer Scott Rudin. Writing team Jim and Steve Armogida will write and run it. And as Rolling Stone points out, Miranda Cosgrove, who played SoR character Summer Hathaway, also became a Nickelodeon star of her own later on, so maybe she'll have something to do with this.

Watch The School of Rock melt faces at the Battle of the Bands below...