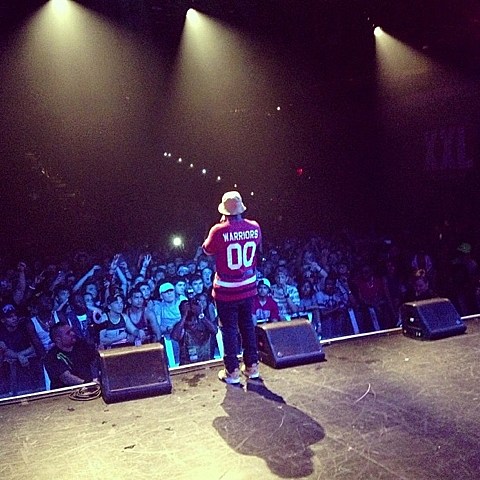 Thanks to TDE's recent success, Q found himself as the most established performer at the Freshman show. With no one to accompany him on stage, he fared better in the larger crowd as a solo artist, breezing through tracks from Habits & Contradictions and throwback collaborations with A$AP Rocky. At one point, he asked Kendrick Lamar to join him but laughed at the audience members who fell for his joke. Fittingly, he won the crowd back with his charisma by asking them the title of his upcoming album. "Oxymoron!" they screamed back. And this was done four times over. [XXL]

The 2013 XXL Freshman Class, including Schoolboy Q, Ab-Soul, Joey Bada$$, Action Bronson, Angel Haze, and more, all came to NYC for a show at Best Buy Theater last night (5/21). You can check out a video of Schoolboy Q playing "My Hatin' Joint" at the show, below.

As mentioned in yesterday's What's Going On? post, Action Bronson made a video for his Harry Fraud-produced song, "Strictly 4 My Jeeps." If you missed it, you can watch that video below. Riff Raff stars in the video, and as discussed, he plays a Scion A/V show in Brooklyn at Coco 66 tonight (5/22) with Stalley and Smoke DZA. Entrance to that show had to be gained through Scion's contest which has since ended.

Schoolboy Q and Ab-Soul are both members of the group Black Hippy (which also includes Kendrick Lamar and Jay Rock), and that whole group is playing the traveling Rock the Bells Festival which hits the NYC-area on October 4-5 at the Meadowlands Racetrack in East Rutherford, NJ. Tickets for that festival are on sale now. The rest of the lineup includes Big K.R.I.T., Common, Danny Brown, Earl Sweatshirt, Tyler the Creator, Jhene Aiko, Juicy J, Rakim, Wu-Tang Clan, and many more.

Updated Rock the Bells lineup and videos below...