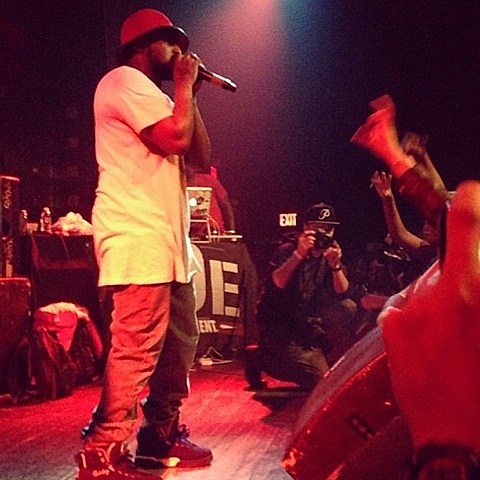 The Black Hippy crew hit NYC for Kendrick Lamar and Ab-Soul shows before they all went down to Austin for SXSW, and afterwards Schoolboy Q returned for two shows of his own here. They both happened last night (early and late) at SOB's and both were sold out.

I caught the early show, which began after three opening sets (including one by Bishop Nehru, who won over the crowd like he did at Ab-Soul's show in February). Q's on the verge of releasing his debut major label album, which he brought up to the crowd throughout the show last night ("what's the name of my new album?" "OXYMORON!"), but he focused the show more on his two existing releases, Setbacks and Habits & Contradictions, speeding through favorites like "Figg Get Da Money," "Bet I Got Sum Weed," "Nightmare on Figg St.," "Sexting," and a ton of others. Q's got the wildest show of all the Black Hippy members, he's constantly moving around on stage and his quick flow bites even harder than on record.

In addition to his own material, he repped Kendrick Lamar by playing "A.D.H.D." (which he does at a lot of shows) and played an A$AP Rocky song, who he mentioned couldn't be there because he's on tour with Rihanna. As Q neared the end of his set, he rapped "Weed and brews, weed and brews, life for me is just weed and brews," which the crowd yelled back to him as he cued the beat to big hit "Hands on the Wheel," which I (and probably others) assumed was going to be the end of his set. But after only one verse, he cut the song and said "Nah, that ain't gonna work anymore, I got a new album coming out. What's my new album called?" "OXYMORON!!" Then he broke into his new single from the album, "Yay Yay," which you can watch a video of from last night's show (along with a stream of the studio version) below.

The whole Black Hippy crew is part of the lineup for the Downtown Music Festivals, which hits the LES in NYC from May 10 to 11 across multiple venues (more details still TBA).