Schoolboy Q at Summerstage in 2012 (more by Chris La Putt) 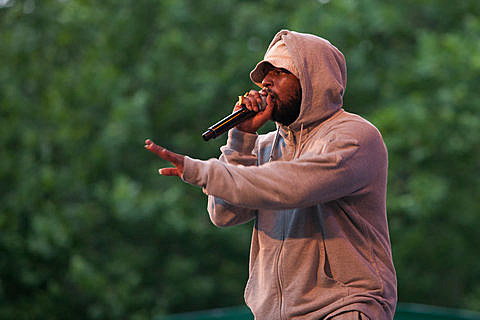 Black Hippy rapper Schoolboy Q, who appears on the new Danny Brown LP (listen), and just released "Banger (MOSHPIT)," the newest single off his own upcoming LP, Oxymoron (release date TBA), has just been announced for a CMJ show happening on October 16 at Webster Hall. Tickets for that show go on sale Tuesday (10/1) at 10 AM. Q's other upcoming shows include Barclays Center (11/2) with Kendrick Lamar and more. Updated dates are listed below.

Another hip hop show happening during CMJ is the annual Duck Down Music/Javotti Media showcase happening on October 16 at Music Hall of Williamsburg co-headlined by Talib Kweli and Brooklyn hip hop vets Black Moon, who will be celebrating the 20th anniversary of their 1993 debut, Enta da Stage, backed by Phony PPL. The rest of the lineup includes Smif N Wessun Reggae Jam Session, RES, T'Nah Apex, Cory Mo and DJ Meka of 2dopeboyz. Tickets for that show are on sale now.

Meanwhile, Talib Kweli will also play NYC, along with Big K.R.I.T., when the two rappers open for Macklemore & Ryan Lewis at The Theater at MSG on 11/13, 14, and 15. Tickets for those shows are still available (but "not many left"). Talib also DJs/hosts the album release show for his Idle Warship partner Res at SOB's on 10/9. Tickets for that show are on sale now.

Not during CMJ, but some other hip hop shows were just announced too.

Updated Schoolboy Q dates are listed, along with a stream of his new song, below...