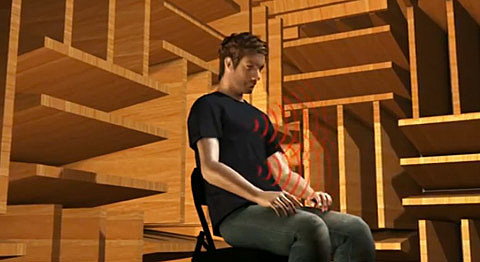 Like the old adage says, the silence is deafening:

Scientists at Minneapolis' Orfield Labs created their own soundless room, an anechoic chamber. Their studies have found that when putting subjects within the chamber, they begin to hallucinate within 30 minutes.

With an average quiet room having a sound level of 30 decibels, the anechoic chamber's sound level is -9 decibels. The ceiling, floor, and walls of the chamber absorb sound rather than have it bounce off as normal objects do. The chamber is so quiet that the subjects can even hear their own organs functioning. -[ATS]

According to a video on the room, humans can only hear things above 0 decibels, which makes any ambient sounds in the room completely inaudible to humans. Kind of reminds me of Ken Russell's 1980 film Altered States, except for without the Ketamine, neanderthals and murder. I hope.

Head below for a video explaining the room.