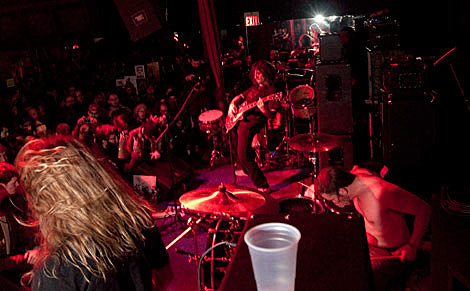 Scion has confirmed exclusively to LA Weekly that they will be bringing their metaltastic Rock Fest this year to Southern California.

"Scion's major event of the year," confirms their publicist, "is a huge metal festival with four stages and 30 bands. We did the first in Atlanta and the second in Columbus [check out part one and and two of our pics & review]. It's always a mix of legendary bands, important bands and up-and-coming bands, representing all the areas of underground metal. And like all the stuff we do it's all ages and free."

"What no one knows yet," he continues "is the next one will be on March 5, 2011 in Pomona. We're taking over the Fox Theater and the Glass House and building two more stages nearby."

Headlining the Scion Rock Fest in the LA area will be death metal royalty Morbid Angel with their first US show in six years (and as of now, the only scheduled US date in 2011)

...Founding member guitarist Trey Azagthoth, regarded by many as the greatest death metal guitarist of all time, will be at the helm along with bassist David Vincent (member 1986-1996 & 2004 - present) and Destructhor (member since 2008).

The Scion Rock Fest will include 26 bands on four stages (including The Fox Theater, The Glass House and two outdoor stages). -[LA Weekly]

Rumors circulated right around the announcement of Scion Rock Fest 2010 that Morbid Angel would play that year's show. Glad to hear that those were (somewhat) true. Hopefully Morbid Angel schedule some shows outside of California too.

One of the bigger names at Scion Rock Fest in 2010 was Shrinebuilder. Don't forget that half of Shrinebuilder, Scott Kelly and Wino, are going on a solo tour in February. Tickets are still on sale for the February 12th Mercury Lounge show which now looks like this:

You can also catch all of Liturgy (who played Scion Rock Fest 2010) on January 14th At Silent Barn with Controlled Bleeding, Cellular Chaos, PAK, and Diablo, January 27th at Union Pool with Naam, Yr Youth, and Arms, February 10th at Glasslands with Extra Life, Lichens, and Chaos Majik, and February 25th At Monster Island Basement with Talk Normal and Nat Baldwin. More local metal shows are listed in the latest edition of Evillive.

The PRP is also reporting a rumored list of other artists playing Scion Rock Fest 2011. I can confirm that at least half of a dozen of those are true. That list is reprinted below...