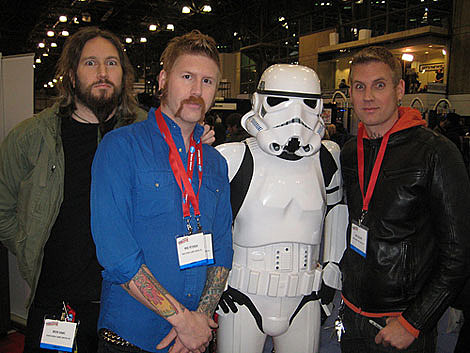 The previously mentioned Scion Rock Fest on Feb 28th in Atlanta, GA boasts a COLLOSSAL lineup including Mastodon, Neurosis, High on Fire, Boris, Torche, Nachtmystium, Wolves in the Throne Room, Kylesa, Rwake, Pig Destroyer, and about a trillion other bands straight out of a Black Bubblegum fantasy.

Want to go? We have ten pairs of tickets AND ten copies of the Josh Graham-designed poster (peep it below) available for giveaway! Email us at BVCONTESTS@HOTMAIL.COM with a subject line of "Scion" for your chance to win. Winners will be selected at random and notified on Feb 13th.

Josh Graham and A Storm of Light will play Europa on Sunday Feb 15th supported by the mighty Zoroaster (also at Scion), Belgian badasses Amenra, and I, Parasite. Tickets are still available. A Storm of Light and Nadja have a split due on March 3rd via Robotic Empire.

Poster and full Scion lineup below...