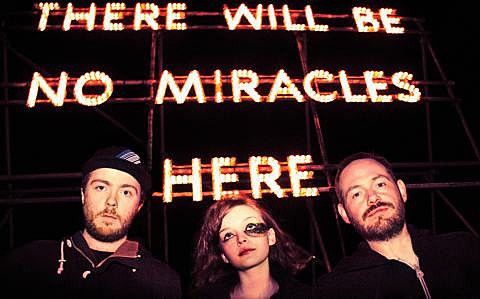 Iain Cook, Lauren Mayberry and Martin Doherty are CHVRCHES - all caps a must. If the Glasgow trio's moniker isn't the most conveniently pronounceable name of recent tipster times, that's just another reason to let their music do the talking.

They've experience in their ranks - Doherty toured the world with The Twilight Sad, and Cook was formerly a member of Aereogramme. Both acts attracted admirable fanbases; but fans should expect something entirely new when approaching the music of CHVRCHES, more likely to channel Prince than post-rock pyrotechnics.

This is electro-pop that shimmers only when the tears are washed from its speaker cones. Debut single The Mother We Share rightly caused something of a stir with its accessible yet ambitious synth angles, positioned somewhere between Robyn and The Knife. Undeniably sad but also euphoric, it's a captivating calling card that sets them apart in 2013. - [BBC]

Scottish electropop trio CHVRCHES came in at #5 on the BBC's Sound of 2013 Poll, not bad for a band that only formed a year ago, played their first live show in July and have one single to their name so far. Mind you, that single is the ridiculously catchy "The Mother We Share" which you can stream in audio and video forms below.

CHVRCHES will be here in March for SXSW (3/12 - 3/17) but will also hit both coasts in addition to their time in Austin. That includes a stop in NYC at Mercury Lounge on March 18. Tickets go on AmEx presale on Wednesday (1/16) at noon with the regular on-sale happening Friday (1/18) at noon.

Videos, track streams and all CHVRCHES North American tour dates are listed below...