Bird's eye view of the scene 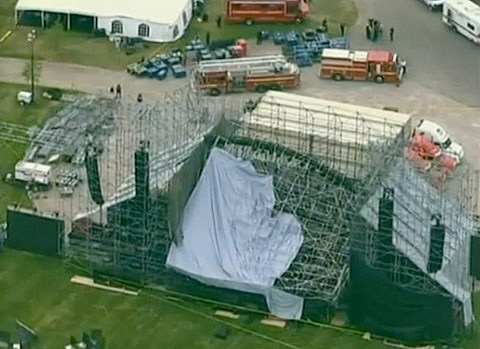 Rest in peace to Drum Tech Scott Johnson of South Yorkshire in the UK, who passed away at the age of 33 due to injuries sutained at the recent stage collapse in Toronto.

A relative confirmed the death of Mr Johnson, from Doncaster, who worked for other British bands, including Keane.

Police in Toronto said the stage was being set up on Saturday when the top part of it collapsed on top of him.

The Foreign Office confirmed that Mr Johnson's family had been notified.

Three other people were injured, one seriously, in the incident at Downsview Park, medical officials said.

The band, from Oxfordshire, south-east England, were not on stage at the time and the sell-out concert was cancelled. A message on the band's website said the gig had been cancelled due to "unforeseen circumstances". -[BBC]

Our hearts go out to Johnson's family.