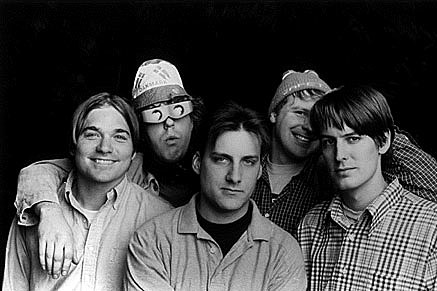 "Scott Kannberg, aka Spiral Stairs, says that Pavement will reform in an interview for the new issue of Loud And Quiet, out this weekend (Jan 10th).

There's been talk of Pavement reforming for quite some time but, in a Loud And Quiet exclusive interview with Scott Kannberg the guitarist told us, "I don't see why not, you know, it could be a fun thing to do, go and play your favourite songs every night!"

Confirming that "everything's fine now" amongst him and his ex-band members, Kannberg went on to say, "2009 would be our twenty-year anniversary too, so that'd be a good time to do it, but I think that's too soon, it might have to be pushed back later."

That news might come as a disappointment to those that have believed rumours of Pavement playing Coachella Festival this year but on that subject Kannberg mentioned that the band have not totally ruled out the Californian festival, providing their booking agent hears the right price. "Coachella keep asking our booking agent," said the guitarist "but our booking agent's pretty strong, you know, he's waiting for the right number I think."

In the feature that celebrates the US indie troupe, Kannberg also spoke about life in the band and how they might even release some unheard, rare material once their final album, 'Terror Twilight', receives the re-mastering treatment that all other Pavement albums have been given over the last few months."
[Loud and Quiet]

Bands rumored to being playing Coachella in 2009, HERE (thx Hiro).