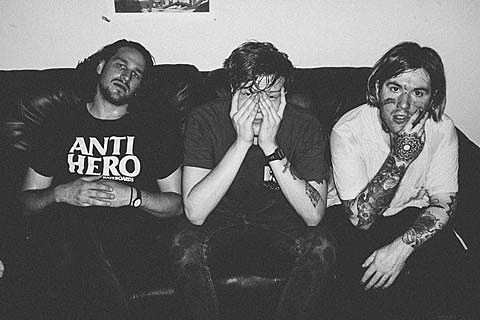 Glasgow, Scotland's WOMPS are well-named, making pummeling pop that hits as hard as it hooks. The group went to Steve Albini for their debut album which he recorded at his Electrical Audio studios in Chicago. Is there a little Nirvana or Pixies in their sound? A healthy smidge, but there's also a jangly pop side to them as well. You can hear all those facets on WOMPS first single, "Live A Little Less / Dreams On Demand," which is out this week. The video for "Dreams on Demand" premieres in this post. It was made in Brooklyn by Robert Kolodny of creative collective House of Nod who deftly mixed footage they shot with archival and public domain footage. He says:

The more and more I listened to the song, the themes of weather, seasons, temperature and the passing of time became increasingly clear. I incorporated a lot of sun imaginary as well as nostalgic Americana archive footage. Why Americana for a Glasgow based band? I'm not sure, something in WOMPS really feels like home (home for us, musically, is in the Brooklyn DIY scene), so it just made sense. All of the slow motion photography peppered throughout the video was filmed by me in a sort of frantic stream of consciousness, putting together the images that came to my mind. We used our in-house Vision Research Phantom Camera for all of that and some clips were captured at over 1000 frames per second.

Watch "Dreams on Demand," as well as the video for the single's other side, below.

WOMPS will be in NYC for CMJ and have lined up four shows as of now:

Stay tuned for more details on those shows. All tour dates are listed below.