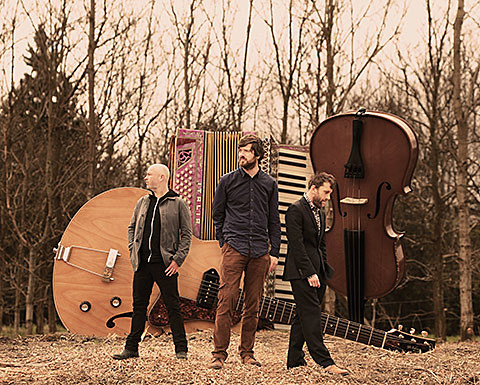 Lau have been nominated as best group in the upcoming Radio 2 folk awards 2014 , and have already taken the title so many times they should arguably retire the trophy. Combining towering technical skill with fluidity and an enviable emotional warmth, the trio of accordionist Martin Green, guitarist Kris Drever and violinist Aidan O'Rourke are perhaps the best live band in the country. As long-standing veterans of Celtic Connections, the sprawling roots music festival that helps keep Glasgow's blood from freezing each January, this date was practically a homecoming gig.

The focal point was the world premiere of The Bell That Never Rang, one of 20 new works commissioned for the UK's first New Music Biennial. Inspired by an image from Glasgow's coat of arms and composed by Lau in collaboration with string experimentalists the Elysian Quartet, the semi-improvised piece evolved from Drever's unhurried guitar figure into an 18-minute beast characterised by swathes of thrillingly queasy glissando. - [The Guardian]

Perhaps the most celebrated modern folk band in the UK, Lau have been making music for nearly a decade and, as mentioned in the Guardian piece above, have won "Best Group" at BBC Radio 2's Folk Awards on four occasions. If you're unfamiliar, you can listen to a sampler of their work below.

Lau are over from Edinburgh for a few U.S. dates, including two in NYC. On Sunday (4/6) they'll play The Studio at Webster Hall, which is a kickoff concert for Tartan Week which celebrates all things Scottish in NY. The whole bill features Scottish artists, including band The La Fontaines, pop singer Nina Nesbitt, and hip hop duo Hector Bizerk. This show is free, but you do need to get tickets online. For a full run down of Tartan Week activities (musical and otherwise) head here.

Lau also play a headlining show at Mercury Lounge on April 11 with Gramercy Arms. Tickets for that show are on sale. All Lau tour dates are listed, along with streams a couple live videos, below.

Meanwhile, for a taste of the Irish, tickets are still on sale for the Irish Arts Center-presented show with The Gloaming at LPR. YES, we know the difference between Ireland and Scotland (unlike Phil Hartman in the video with Mike Meyers below).

and there's a lot more Scottish where that came from: