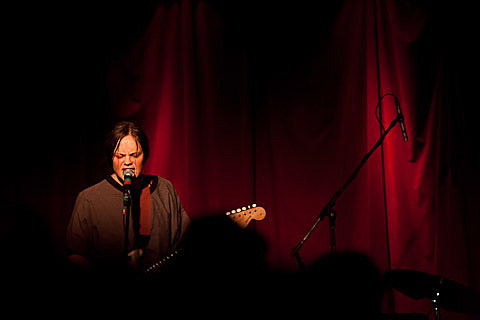 When Emil Amos, the man behind Holy Sons, walked on stage at the Mercury Lounge in NYC on October 6th, the room was still sparsely populated. It was early - just 7:00, but there was little time to waste. The venue had booked back to back shows.

Amos began his show accompanied by just his electric guitar. After playing his first song, he surveyed the crowd. "I don't know if I've actually been to an early show," he admitted in between sips of whiskey and tea. "So if you feel weird, that's totally fine."

Holy Sons falls mostly under the classification of lo-fi/folk. At times, Amos' voice is reminiscent of Will Oldham's (whom both he and Scout have collaborated with). But his music also features moody and aggressive instrumental pushes, as if Amos didn't quite shake his interest in the hardcore scene of the early 90s.

After a few songs, Amos scanned the room. Upon seeing his band mates, he casually offered them an invitation to join him on stage, bringing the number of performers up to four. Throughout their performance, people slowly filtered in and lurked in the shadows in the back of the room.

When Holy Sons had concluded their short set, Scout (Emma) Niblett left her post in the audience and walked over to affectionately greet Emil with a kiss before continuing with her set up process. In everything from her music to her very appearance, Niblett embodies a compelling mix of casual innocence and I-could-kick-your-ass-if-I-wanted-to confidence. This night, she wore an over-sized army surplus jacket of sorts, offset by touches of femininity - a bright red flower tucked behind her ear and rings on nearly every finger.

After carefully positioning the mic and laying out a notebook containing a hand-written set list, Scout Niblett took a seat behind the drum kit with her guitar hanging around her neck, which allowed her the freedom of moving between the two instruments whenever the mood struck. Like Holy Sons, she played the first few songs of her set solo.

In a characteristically bold and candid move, she turned to the audience. "Any questions?" She waited a few beats for a response. "I always ask if anyone has any just in case." Upon hearing nothing, she played one more song solo (this time at the front mic) before signaling wildly to Dan Wilson to join her on drums.

Scout Niblett's music is marked by furious highs and delicate lows, and she navigates between the two like a restless, overenthusiastic child choosing between new toys on Christmas. There aren't many people who could get away with singing the line, "We're all gonna die" with such a perfect balance of sweet and sinister.

With Wilson's support on drums, Niblett turned up the distortion and things got gritty. Though there is definitely a special intensity to her solo performance, Niblett and Wilson make quite a team on stage. At the conclusion of each song, Wilson watched the singer intently, trying to time the last drum beat with the moment her foot tapped the pedal.

Midway through the set, she paused to take in requests. This time instead of being met with silence, the audience responded by shouting out a number of conflicting song titles. "OK. We'll try to fit some in," she said, reflecting on her options. She settled with one of the first requests made, "Wolfie."

Then, as if remembering she was on a tight schedule, she addressed the sound guy after a few songs. "How much time do we have?" "You've got time for a couple more." She reflected on her set list. "Did I do that Beloved song? No? Shit! That ruined everything," she exclaimed, stomping her foot in mock outrage. To the delight of the modestly sized but clearly dedicated audience (a couple of people apparently drove down from Canada), she launched into "Nevada" with such fervor that she was nearly shrieking the lyrics. Of course, she still managed to smirk through the strain.

"OK, so this is the last one," she said, prompting disappointment and denial from the crowd. Immediately upon wrapping her last song ("Do You Want to Be Burried with My People"), Niblett only had time to offer a brief word of thanks before the house lights and music came back on and severed any hope for an encore.

Emma and Emil also played a show one night earlier at Knitting Factory in Brooklyn (videos below), and a show two nights before that in Montreal for Pop Montreal (pictures in this post) (hopefully those Canadian fans were able to catch that show too). All mentioned gigs were part of a short tour for the couple that has now concluded, though Scout is still on tour.

All upcoming dates, a couple more pictures of Scout from the Montreal show, videos from Knitting Factory and Scout's Mercury Lounge setlist, below... 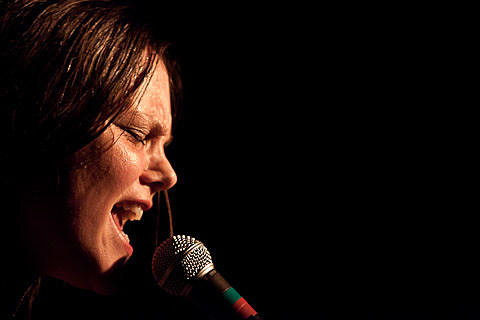 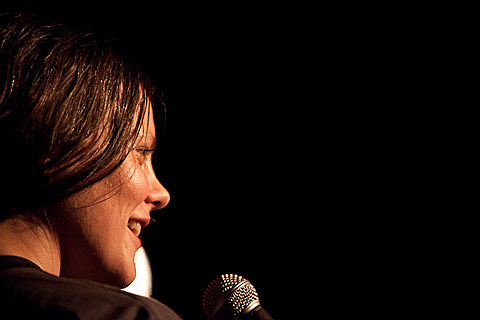