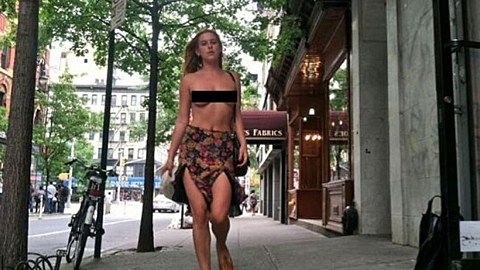 You may have heard by now that Scout LaRue Willis (daughter of Bruce Willis and Demi Moore) has been protesting against Instagram's nudity policy by walking (and buying flowers) around NYC topless and tweeting pictures of herself doing so with the #FreeTheNipple hashtag. Via NY Daily News:

"Legal in NYC but not on Instagram," Willis tweeted about her snaps. She captioned another: "What @Instagram won't let you see #FreeTheNipple"

Her protest came after the social media platform removed one of her photos for violating its Community Guidelines.

The photo that got deleted was one of a sweatshirt that depicted two topless women, nipples clearly visible.

"My comfort with my body should not be dictated by how others perceive me," Willis tweeted. "However, I don't wish to force this view on anyone. If you don't like what you see, simply unfollow me."

"This is about helping women feel empowered to make personal choices about their bodies not dictated by what society says is decent," she says.

You may remember that in addition to having famous parents, Scout is also a frequent Nicolas Jaar/Darkside collaborator. Nico's pal Valentin Stip, who put out his debut LP, Sigh, on Jaar's Other People label earier this year, will next play NYC on June 21 at Cameo with Justin Miller and Evan Michael. Tickets for that show are on sale now.

Bruce and Demi's other daughter Tallulah (who some also call rebellious for her tattoo of a dog's head) is also involved in music. You may recall she teamed up with Odd Future's Tyler the Creator and Syd tha Kyd for Tyler's "Tamale" and is/was dating Lucas of Odd Future.