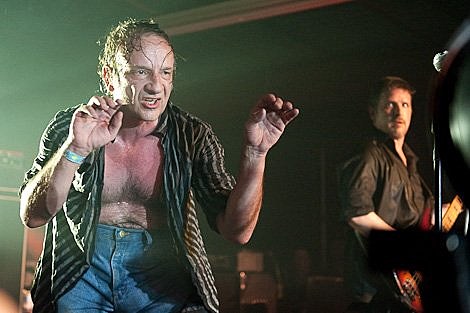 Scratch Acid was an Austin, Texas noise rock group formed in 1982... The band was named by music journalist Will Lerner as "the American equivalent of the Birthday Party." After developing a reputation as a crazy, noisy punk band, Scratch Acid disbanded in 1987. According to the liner notes of The Greatest Gift, the band members never received compensation from either Rabid Cat or Fundamental Records (who distributed their releases in Europe).

Brett Bradford went on to form Colorado punk band Great Caesar's Ghost. They disbanded in 1993. He also formed Sangre De Toro and played with Areola 51. Washam went on to perform with many other bands, including the Big Boys, Ministry, Helios Creed, the Didjits, Lard, and Tad. In 1987, Sims and Washam joined Steve Albini in the band Rapeman, which disbanded just before Sims reunited with Yow in 1989 to form the Jesus Lizard. [Wikipedia]

The string of impressive ATP reunions continue, as all four original members of Scratch Acid (David Yow, David Wm. Sims, Rey Washam, Brett Bradford) will reunite again to play ATP Minehead in the UK this December (12/2 - 12/4, tickets). The fest is curated by Jeff Mangum, and will a feature a performance from the Neutral Milk Hotel mastermind, along with Fleet Foxes, Yann Tiersen, Superchunk, The Magic Band, Tinariwen, and others to be announced.

Even better.... David Wm. Sims has promised that "There will be other dates in November and December in the US, and possibly in Europe." Stay tuned.

In related news, tickets are still available in various incarnations for the ATP I'll Be Your Mirror event in Asbury Park on 9/30 - 10/2. The Portishead-curated festival that Jeff Mangum is also playing recently announced the additions of Swans, Battles, Deerhoof, and more.

ATP Minehead flyer and some video from Scratch Acid's 2006 reunion, below. 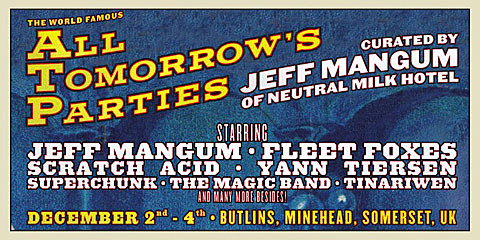