Yow and Sims of Scratch Acid,
on stage with The Jesus Lizard in 2009 (more by Timothy Griffin) 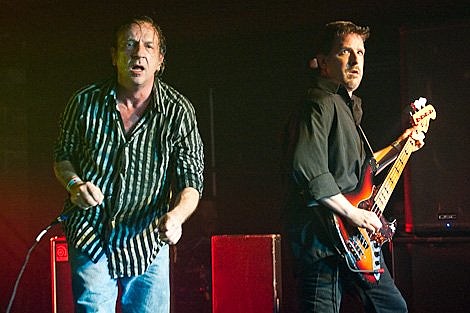 And the first U.S. Scratch Acid show has slipped out of the gate. The band will play the Variety Playhouse in Atlanta on November 1st. David Wm. Sims (also of The Jesus Lizard) previously announced that the band would do a string of US dates in November and December to accompany their UK ATP appearance, so look for those shows to appear soon.

Speaking of Atlanta, they've got it good because that's also where the still-reunited Man or Astro-Man? are playing this Wednesday night (8/31). The show at the Earl, presented by Chunklet, is still on sale. It's also one of 10 scheduled dates for the Alabama band, October 15th in Athens, GA included. They are all listed below (no NY).

Speaking of Chunklet and Jesus Lizard...

Chunklet is beyond thrilled to announce the release of "The Jesus Lizard: CLUB" on 2xLP gatefold for worldwide distribution on December 6, 2011.

This is the vinyl soundtrack to the DVD which came out in September. "CLUB" is the definitive document of the The Jesus Lizard reunited for their first American performance in over a decade at the Exit/In in Nashville in 2009.

It was a tour that was heralded the world over, with stops at festivals and clubs all over the world. Sasha Frere-Jones, writing for The New Yorker: "It may have been the only reunion show I've ever seen where I forgot almost immediately that the band hadn't played together in more than a decade."

Featuring the entire evening's performance, "The Jesus Lizard: CLUB" goes inside a fan-favorite set list of an incendiary performance from one of the greatest bands of the modern era. "CLUB" is being released as a double-LP in a gatefold jacket. A one time edition of 1,000 copies. Mail-order copies (ltd to 200) available on colored vinyl.

Man or Astro-Man? dates below...