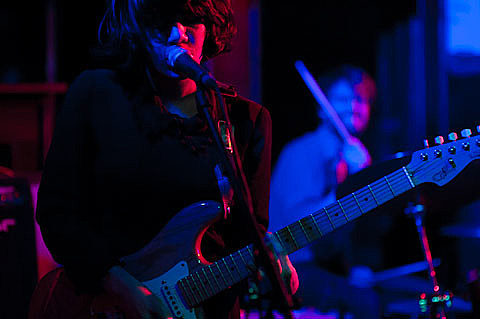 Against Me!, Screaming Females & Lemuria are going on tour this summer, and that tour just got a little bit bigger. The three bands will play Music Hall of Williamsburg on June 5th, two days before they hit Webster Hall. Tickets are still available for the Webster show, and tickets for the new Brooklyn show go on AmEx presale today at noon, and general sale on Friday at noon.

Screaming Females recently tried play a show in New Brunswick, but they wrote...

So we didn't get to play the New Brunswick, NJ show the other night because the cops showed up. Luckily all the amazing touring bands did have a chance to play and see how rad the NJ DIY community can be. Screaming Females haven't played a proper New Brunswick show since 5/12/2010. It breaks my heart! Check out the bands if you haven't.
Broken Water (Olympia, WA)
Songs for Moms (Oakland, CA)
Grass Widow (San Francisco, CA)

Luckily for those still wanting to see the band in NJ and not with Against Me!, Screaming Females are also playing Kearny Irish Club on May 6 and Stanhope House on May 19 (the names of the NJ towns are both in the name of the venues).

In other news, Screaming Females palyed Carson Daly again (their 2nd or 3rd time) on Thursday night (video below), and you can hear them on WFMU soon:

We recorded a set at the world famous NJ based radio station WFMU yesterday. It will air on the show "Beastin' The Airwaves! with Keili " on Sunday May 15 at 6am eastern USA time. Early!!! You can also listen to the set at the archives after it airs. We debuted a new song during the session. I think it is a hit!

All tour dates and that Carson video below..