Screaming Females at Bowery Ballroom in 2013 (more by Amanda Hatfield) 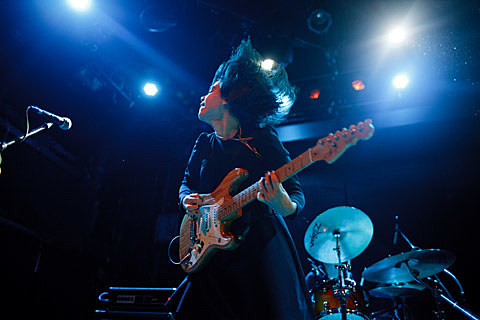 NJ shred punks Screaming Females rarely have a lack of shows. Their previously announced tour dates have them in NYC this Saturday (3/22) at ABC No Rio for a matinee with sludge metallers Thou (who also play Vitus the next day), and it won't be long til they're back. The Screamales will celebrate their first live album, Live at the Hideout (recorded in Chicago with Steve Albini), which comes out 4/8 via Don Giovanni, with a NYC release show on May 16 at Brooklyn Night Bazaar with their DG labelmates Marvin Berry and the New Sound. Like all BKNB shows, admission is free.

Updated dates are listed, with a stream of "Lights Out" from the live album, below...

Screaming Females - "Lights Out" from Live at The Hideout