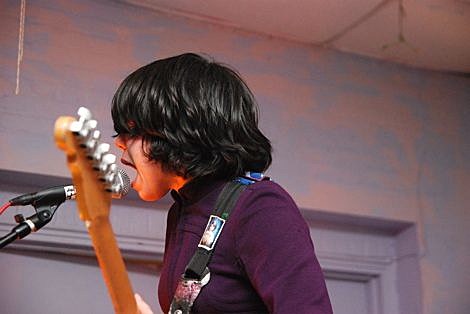 "Holy Hell, the first official Noun release, incorporates keys, organs, and toned-down guitars and drums. The result is clearly different than Screaming Females: it's mellower, more melodic, and whereas the Screaming Females' songwriting process is a three-way discussion, Marissa Paternoster writes all of the songs for Noun.

The The 12-track solo album, whose title track you can download above, will be relesaed in June 2010 on Don Giovanni Records who are holding another showcase in NYC. Last time it was one big show at Bowery Ballroom (forgetters and Jeff the Brotherhood were both on the bill). This time they're doing two nights in a row at Mercury Lounge (April 24-25).

April 24th will will feature a headlining set by Screaming Females who are currently being advertised as "special guest" probably due to their April 9th show at Irving Plaza with Obits and Ted Leo. The Measure, Barrakuda McMurder, Byrds of Paradise, and Modern Hut are also on the bill. Tickets are on sale.

April 25th is headlined by Shellshag and will feature a set by Noun, as well as sets by Full of Fancy, Black Wine, and Pregnant. Tickets are on sale. All dates below...