view of the fight from the audience (photo by John Obeidin) 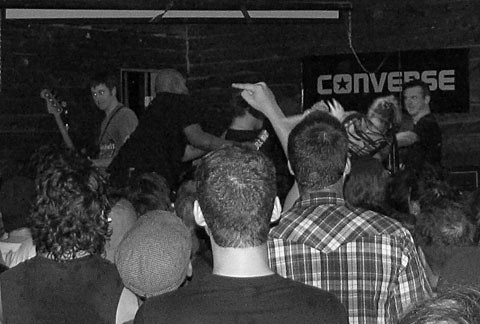 Ben Weasel already apologized for his involvement in an altercation during SXSW at Scoot Inn, but now his Screeching Weasel band members have responded by quitting the band and writing their own letter. Read it in full below...

The members of Screeching Weasel (Dan Schafer, Adam Cargin, Justin Perkins, and Drew Fredrichsen) would like to offer a sincere apology to our fans, our management (Ben Perlstein @ Motivation Management), Chad and Vanessa @ Fat Wreck Chords, Deborah Toscano @ Devil Dolls Booking, The Scoot Inn and it's employees, all the support bands, and anyone else negatively impacted by the scene that developed in Austin last Friday night, March 18th.

The un-calculated act put forth by Ben Foster leading up to and including the violence that erupted on stage is seen by the band as shameful and embarrassing. The sentiments and actions expressed were completely out of our control and in no way represent the band members' view points or moral compasses. As a result, the band has discussed at length and has come to the conclusion that as a group we will not likely be able to muster the dignity to attempt a live performance as "Screeching Weasel" in the for-seeable future. We each look forward to re-evaluating our involvement in the band as we move forward if we are given the opportunity.

Collectively, as musicians, we feel that it is imperative that the music do the talking. We have made every effort as a group to ignore the gossip, Internet feuds, and general negativity that has (at times) overshadowed what we believe being in a band is really about. It is pointless to try to place the blame where those actions are concerned and we don't care to get involved other than to say we don't condone or support any of it. We are very proud of the effort we put forth in creating what we believe to be a fantastic new album in "First World Manifesto" and it deeply saddens us that we will not be able to bring that excitement to audiences around the world in the form of a live show in the coming months.

We all feel extremely deflated following this public spectacle and would no doubt be doing the music an injustice if we were to force a performance. As friends and band mates, we are absolutely positive that Ben regrets his actions last Friday night. We have no doubt that his apology is sincere and that if he could take it all back, he would. We don't wish to place any more hardship upon him with our decision to discontinue our involvement at this time, but it is something that can not be avoided.

In the future we would love to see these wounds heal and for the opportunity to play together in a positive light materialize. If Ben feels the need to immediately carry on with a new cast of characters--we support his right to do so. Again, we would like to thank our fans for all of their past support and hope that they will continue to support us should the opportunity to perform as "Screeching Weasel" present itself again in the future.

Yikes. No word on whether the below list of sold out shows will still happen, Screeching Weasel 25th Anniversary Weekend in Chicago included. Here's that video again...