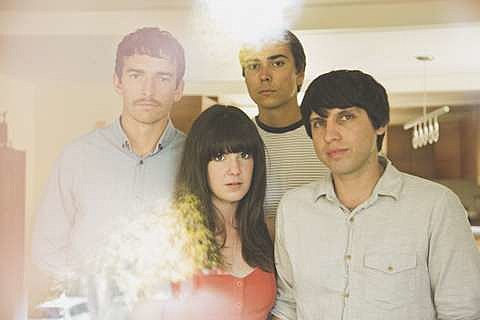 Seattle's Seapony are one of the many bands in town for this weekend's NYC Popfest, playing as part of the Saturday night (5/19) show at Public Assembly with Comet Gain and the Pooh Sticks. Tickets for that show are available. In addition to the Popfest show, Seapony are also playing Friday night (5/18) at Littlefield with local shoegazey pop band Field Mouse. Next weekend Seapony play the San Francisco Popfest (May 25 - 27). All upcoming Seapony tour dates are listed at the bottom of this post.

Seapony's shimmery, exceedingly hummable debut album, Come Away with Me, was released about a year ago via Sub Pop kid sister label Hardly Art. You can download two tracks ("Dreaming" is especially catchy) from the album at the top of this post or stream the whole thing below.

Most recently the band contributed a new track to a Hardly Art 5th Anniversary compilation that could only be procured at the label's anniversary shows, but you can stream it below.

Those streams and a list of all dates below...