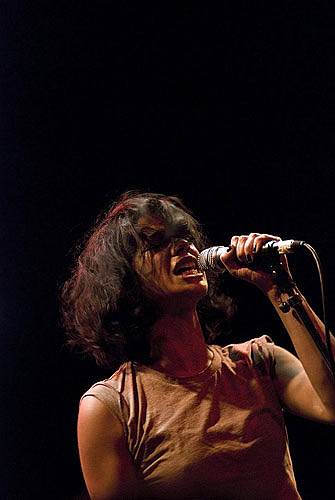 We're back and we're bringing a bit of summer, indoors for a few select shows dubbed "On-the-Side" at a new DIY venue called @Seaport.

The night of music, film and art includes a special performance by New York's Beat the Devil featuring Shilpa Ray, one of the city's most exciting new voices, performing tracks from the new album "Idiot's Guide."

Many music fans will recall the band's performance as the opener for Menomena this past July at Seaport Music.

Also slated for the evening is the premier of an untitled documentary on the Beat the Devil by filmmaker Ben Clayton, plus an exhibit of work by artist Jason Frederick and photographer Mitchell King.

@Seaport is located in the South Street Seaport historic district at 219 Water Street (at Beekman Street). Admission is free, however reservations are recommended. Please send an email request to rsvp@dimaproductions.com.

Translating the successful vibe of the summer into smaller, year-round shows is something we've always wanted to try. We've had interest from bands, but lacked an indoor space and a budget. With two out of three in place, we're giving it a try.

While a programming budget still doesn't exist, the Seaport Music team is turning to a DIY model for performances. The model has proven highly successful in Brooklyn, so why not in lower Manhattan?

Come check it out!

Above photo of Beat The Devil @ Bowery Ballroom (opening for Vampire Weekend on Jan 29, 2008) by Bao Nguyen.