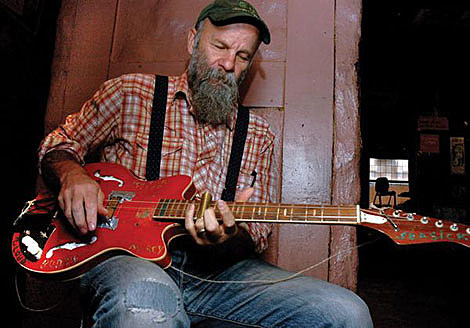 "Forty years ago, Seasick Steve was a hobo whose constant wandering brought him down here to the Deep South more than once. At 13, he had fled his home in Oakland, California, on the run from a violent stepfather who, in a fit of rage, had thrown him though the window of his mother's house. 'I had a moment of revelation,' he says. 'It was like I had been pushed right to the edge by what was happening to me, and I knew I was going to have to kill that motherfucker. Then, I suddenly thought: "No, Steve, it don't have to be like that. You don't have to end up in jail for one reckless act." It suddenly hit me that there was another way out. I could just run, and keep running. That way, at least my life would be my own.' ...

Seasick Steve's late success has surprised no one more than himself, and he tells me more than once that he doesn't really expect it to last but he's going to try to make himself 'some real money' while it does. Though both his songs and his persona trade heavily on his hobo credentials, he actually turned his back on the road way back in 1973. 'It just got too damn hard,' he says, 'and I knew if I kept on, I'd end up dead in a ditch somewhere.' The trajectory of his life since then is hazy and, one suspects, he plays down the semi-settled years, sensing correctly that his mainly young audience prefer the myth to the reality.

For the past 35 years, he has worked, on and off, in the music business, both as a hired session musician and as a studio engineer. Along the way, he has played with Joni Mitchell and, when he lived for a while in Olympia, near Seattle, in the late Eighties, helped produce albums for 'damn near every grunge group in America'. Though he has been married to his second wife for 27 years, and has five grown-up sons, Steve has had some trouble putting down roots in one place. 'I'm a settled hobo' is how he puts it, adding that he and his wife have lived in 59 different houses to date. They are currently based in Norfolk, which, he assures me, 'is a whole lot more exciting than Norway'.

It was in the Norwegian town of Notodden, however, that he found himself living four years ago. There he started recording a bunch of songs on a four-track tape machine. He was recovering from a heart attack that had left him feeling 'hopeless and helpless', and tells me he 'didn't have no big plans for the songs 'cept for giving them to my wife'.

The results found their way to his old friend, Joe Cushley, a DJ on internet radio station Resonance FM, who passed them on to the small British independent label, Bronzerat Records. Towards the tail end of 2006, Seasick Steve got a call from the BBC, who wanted him to appear on Later... with Jools Holland. Though he had no idea who Jools Holland was, he was persuaded to perform one song, 'Doghouse Boogie', on his New Year's Eve Hootenanny. It caused a stir in the studio, and an even bigger one online. A few days later, Seasick Steve's website collapsed under the weight of several thousand hits. The most unlikeliest cult star of the Noughties was born: an ex-itinerant pensioner who played the shit out of a three-stringed guitar miked up with gaffer tape. [The Guardian, September 2008]

After wowing the UK and Europe for the last two years, Seasick Steve is bringing his Three String Trance Wonder, One String Diddley Bow and Mississippi Drum Machine to the All Points West festival (Friday July 31, same day as Beastie Boys / Yeah Yeah Yeahs), as well as two small shows in the NYC area: July 29 at Mercury Lounge (tickets on sale tomorrow [6/5] at noon, Amex Presale as we speak) and August 8 at Southpaw (no advance tickets yet Tickets for that are now on sale too). Video of that famed Jools Holland appearance, plus a couple more videos and tour dates after the jump...

Seasick Steve - "Save Me"