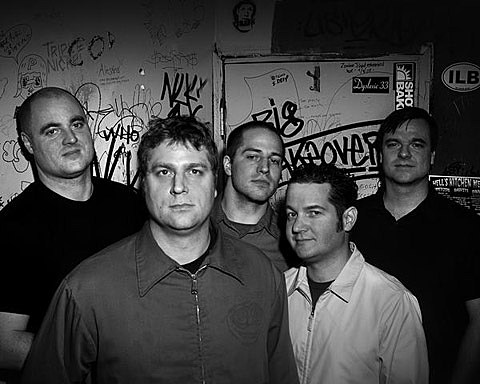 Weaned on all-ages hardcore shows in their Tacoma, Washington, hometown, the five members of Seaweed struck out in late 1989 to emulate their heroes. The agile hook-core quintet was soon playing bars where its members were too young to drink, wowing onlookers with incessant pogoing and urgent metal-influenced riffs. Six years later, Seaweed's maturation (and punk's newfound commercial appeal) proved marketable, as the band signed on with Disney's Hollywood Records. [Trouser Press]

Seaweed's major label career lasted a whole album (1995's Andy Wallace-produced Spanaway), and they ended their career on Merge with 1999's Actions & Indications. (Download that LP's "Thru the Window" at the top of this post.) After taking most of the '00s off, they reformed for Bumbershoot in 2007, and now Seaweeed are apparently back. The reignited group will play their first NYC show in over a decade at The Bell House on Friday, April 22 2011.

No other dates have been announced but it seems unlikely that the band would trek out to the East Coast just for one show, though someone at the Bell House tells us this will be their only NYC show. Most Seaweed videos on YouTube have embedding disabled (like their 1992 Sub Pop single "Bill"), but you can watch "Start With" after the jump.

Filed Under: reunions, Seaweed
Categories: Music News, tour dates
Comments
Leave A Comment
12 New Songs Out Today
new I Am The Avalanche song, Q&A, and 15 songs that influenced their new album
Beyond (pre-Quicksand, Burn, 108, Inside Out, etc) documentary on the way, trailer out now
stream Ghost Work’s (Seaweed, Minus the Bear, etc) debut album
20 essential Merge Records releases that aren’t ‘Funeral’ or ‘In the Aeroplane Over the Sea’
13 great punk and rock documentaries to stream right now