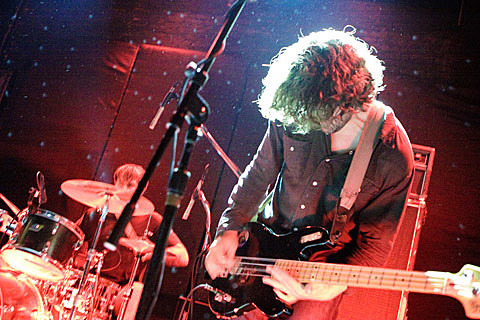 We knew that there was a new Sebadoh EP on the way, but now we learn that there will be an album too, titled Defend Yourself, which will be out September 17 on Joyful Noise. It will be the band's first new album in 14 years. Lou Barlow chatted a bit about the new album on the Joyful Noise blog:

How did you decide that now was the time to make the next Sebadoh record?
The touring in support of the Bakesale reissue went very well. We had good chemistry as a 3 piece, Bob & Jake had been playing together for years & along with my 20 year history with Jake, D'Amico's contribution to the lineup was just a good fit. A new record had always been something we knew we would get around to doing & the pieces finally seemed to fall in place. My experience with the Dinosaur Jr. post-reunion albums had shown that it was best to just get on with it, drop any fears of not surpassing the band's earlier work & just make some new songs to play live & share with the people who still care about us.

Are you excited about anything in particular?
I was excited to work with Wally Gagel on the final mixes for my songs, he was my writing partner/producer during the heyday of the Folk Implosion. He & I hadn't worked together for awhile & I liked what he did with Jake's recordings. He also saved my ass by being available when I really needed him.

I'm relieved that we were able to find the time to make a new LP happen & surprised at how well it seems to hang together conceptually. I'm also pleased that we kept to ourselves during the recording & didn't have much, if any, outside intervention. That, to my mind, makes it a true Sebadoh record & aligns the style of Defend Yourself with our early releases.

I used more 4 string guitar on this record than any record since Bakesale. Also, we tuned lower & I reverted back to the downstroke strumming style that I used early on. I made a conscious effort to do what felt the most natural as opposed to trying to streamline the sound as I did with some of the songs on The Sebadoh & Harmacy.

Meanwhile, that new five-song EP, Secret, is out June 25 and you can stream the whole thing below.

Lou also plays with Dinosaur Jr. on Friday (6/7) at Governor's Ball and the late night afterparty at Irving Plaza (win tickets!) bandmate J. Mascis plays Union Pool on Saturday afternoon (6/8) with his psychedelic blues-jam band Heavy Blanket. It's part of the BrooklynVegan-curated edition of the venue's free Summer Thunder and the show also features Love As Laughter. The fun starts at 2 PM and, again, it's free.

Sebadoh have a few tour dates this summer, but none currently lined up for the East Coast. Those dates are listed, along with the EP stream, below.