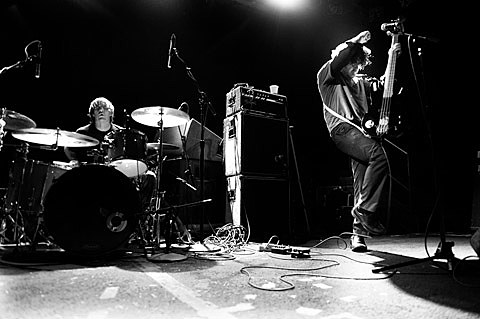 Sebadoh are touring again, this time a late summer East Coast jaunt that will finish up in NYC on August 22 at Bowery Ballroom. Tickets for the Bowery show go on sale Thursday (5/24) at noon and all listed tour dates are below.

This tour will bring various permutations of Sebadoh in one night. In addition to the indie rock trio as you know and love them, you'll also get Circle of Buzzards (aka Sebadoh rhythm section Jason Loewenstein and Bob D'Amico) and a solo set from Lou Barlow.

Before the tour, Lou, Jason and Bob will go into the studio to work on a new Sebadoh album which should probably see a release next year. But according to Backstage Rider, there may just be a new Sebadoh EP even sooner. Additionally, Lou plays on the new Dinosaur Jr. album, currently slated for a fall release.

In more Sebadoh news, this past March they reissued Weed Forestin' with the bonus cassette, Child of the Apocalypse, both of which are streaming on bandcamp. The casette, CD, and an LP/cassette/USB package are all sold out, but there are still 63 of the 500 vinyl pressings on sale at bandcamp as of this post and you can of course purchase the digital album.

A video of Lou Barlow performing songs from Weed Forestin' in LA this past March and a list of all Sebadoh dates are below.