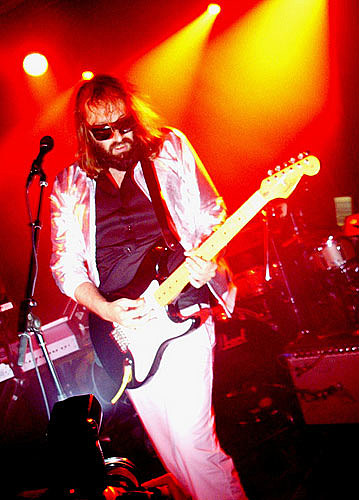 Last week in dance was pretty crazy. The French invaded in the form of Sebastien Tellier on Wednesday and the Institubes crew on Thursday. Both were pretty awesome.

Sebastien's set at Hiro really showed how (all hype aside) truly talented he is. His songs are really finely crafted, electronic, pop songs that should be grouped somewhere closer to artists like Air rather than some of the fly by night electro nobody's going to remember in a few years time. The setlist from Wednesday is below. There's a full review of the show over at my blog.

Thursday night (July 31), Institubers Jean Nipon and Bobmo had everyone losing it at Santos along with the French label's only US artist, Curses! Jean Nipon opened the night with a mix that was a bit of everything - kind of like his Freedom Fries mix, but way more banging. Curses followed up with a great set, showcasing his signature, heavily UK-influenced sound and flawless live vocals. Afterward France took over with Bobmo deejaying into the wee hours with the great, 90's, housey sound that artists like he and Surkin are excellently reinventing and bringing back. Overall it was a really fun night of good, super danceable tunes. This was my second time at Santos - still loving the soundsystem and the fact that people shamelessly get down. 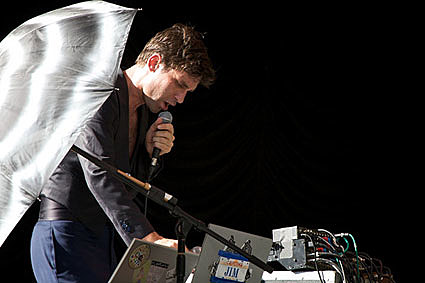 I rounded out the crazy week by hanging out at Summerstage on Sunday. The weather was great and it was a nice, mellow way to spend the day (despite not being into that much of the music). Jose James is a good jazz vocalist, but not my cup of tea. Little Jackie managed to fuse pop with a throwback soul sound pretty successfully. By far the largest turnout at Summerstage was for Janelle Monae. The instruments were very loud and it was hard to hear her at times, but what I did hear of her was not that impressive. It made me realize how much I can't wait to see Sharon Jones (who is playing Summerstage in a couple of weeks, on August 17th). I did like Janelle's energy though - she was dancing around like a maniac despite the park being quite hot under the blazing sun, and I liked her nods to Fritz Lang's Metropolis (which is also the title of her suite, check her myspace for an explanation). Gilles Peterson played some upbeat, soulful, dancey jams that had everyone moving, but he wasn't mixing them together! Hopefully that won't be the case at Cielo on Thursday (more on that later)....

Jamie Lidell, Soulwax and more below....

By far, Jamie Lidell's performance was my favorite part of the afternoon. Having never seen him live before and only being familiar with a very limited amount of his material I wasn't quite sure what to expect. From the get-go it was evident that we were in for a lively, funky, soulful hour and 15 minutes. As great as Jamie's band was, the highlight was definitely when they went offstage and left Jamie to his own devices, literally. For maybe 20 minutes or so Jamie hovered over a table full of keyboards, laptops, samplers, and who knows what else. He proceeded to record and loops his vocals, manipulate them, beatbox, loop some samples, and then sing on top of it, the end result sounding amazing. Afterward the band came back and together they ended a refreshing, updated, electronic take on soul that somehow did not compromise any of the genre's integrity. Jamie also played Lollapalooza right before that and will be back soon.

As relaxed as I feel after just reliving the mellower part of my weekend in my head, it's time to get hype! The artists coming through and amount of things happening this week is certifiably insane. At this rate we may not make it through August.

Wednesday night (tonight) Soulwax is at Irving Plaza. Despite having written this column since March, I don't think I have gone off on a full Soulwax tangent. Soulwax is quite simply one of the best live electronic music experiences you can have. Last year I had no idea who they were and thankfully David Bruno said something to me along the lines of, dude - you have to go. They are amazing. AMAZING. So I went and freaked out. They were like nothing I had ever experienced before. Take one of the most banging deejay set's you've ever witnessed, or the great energy behind acts like Simian Mobile Disco or the Chemical Brothers, then concentrate it into a 4-piece live band and you've got Soulwax.

On last year's tour Soulwax performed their Nite Versions album live in its entirety. I know when they toured Europe this year they were performing live versions of their remixes, but information on what's in store for Wednesday has been scarce other than the fact that it will be Soulwax (live), a 2ManyDJs (David & Stephen Dewaele) set which cover insane amounts of stuff (check the tracklisting for As Heard on Radio Soulwax Part II), and a screening of their documentary, Part of the Weekend Never Dies. Watch the trailer below and get a ticket! 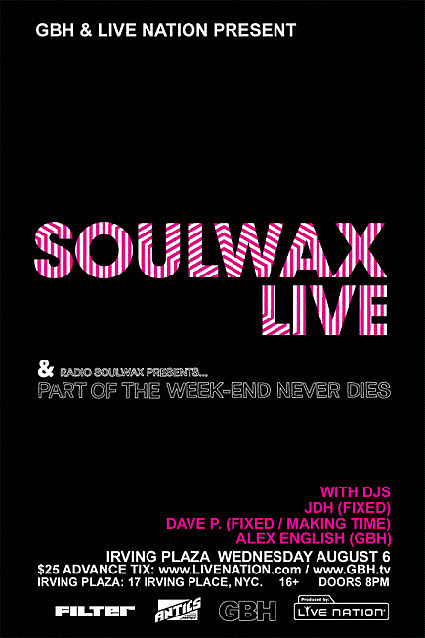 Take advantage of the Belgians while they're in town - after the show at Irving, Soulwax (as well as Vin from Midnight Juggernauts) is deejaying their own afterparty at Arlo & Esme. Info on this party (and some other good ones coming up in the Girls & Boys weekly) on the flyer below: 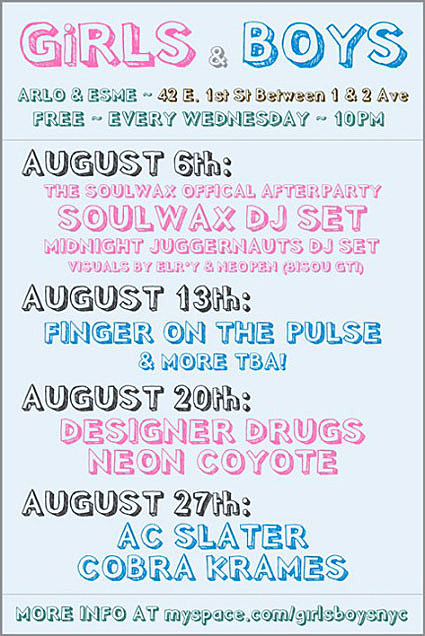 If you still absolutely cannot get enough of Soulwax (which is often the case with these guys - I saw them the 2 nights in a row they were here last year despite still being totally exhausted from the weekend) One Man Party (Steve from Soulwax) will be deejaying at Hiro as well as Adam Freeland. I missed Adam when he was at Le Royale back in March, but heard from two very well-trusted sources that he was very good. According to GBH,

Adam has earned a reputation as the world's most popular breakbeat DJ - but it is his ability to fuse electro, funk, house, hip-hop, rock (among other musical styles) which sets him apart as one of the most consistently entertaining electronic artists out there. 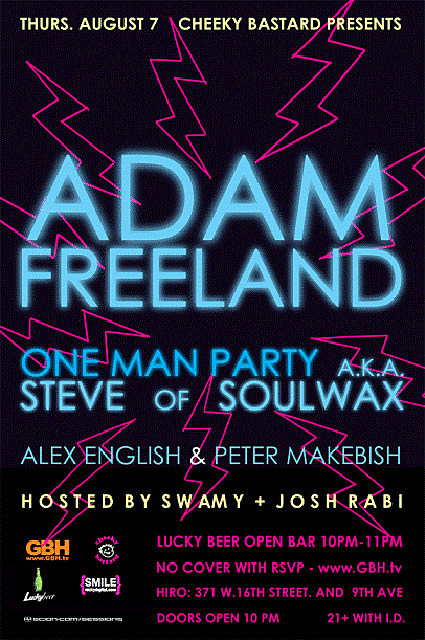 If you're Soulwaxed out or just want to take advantage of some other things that are happening Thursday night there is a great, mainly New York based line-up at Santos put together by Plant Music. It features live performances from the Glass and Kap10Kurt as well as dj sets from Tittsworth (who will be celebrating the release of his album 12 Steps that evening), Dave Nada, and Stretch Armstrong. The Bronx's young house fiends, the Martinez Brothers, will be deejaying in the basement. 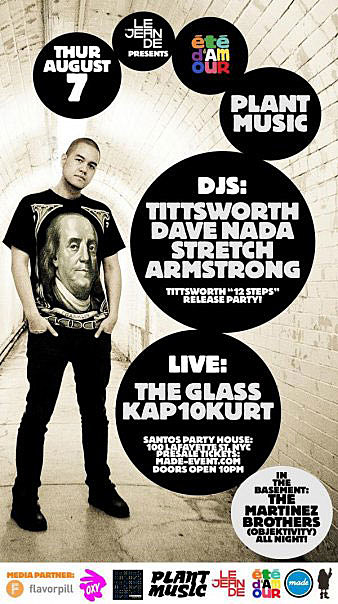 One last option for Thursday, on the total opposite side of things - Gilles Peterson is at Cielo. When I saw him Sunday at Summerstage he was just deejaying in between everyone's sets, but he was playing great, upbeat, happy, soulful stuff - excellent for summer. Provided he actually mixes the tracks (which I'm sure he will) it should be a fun night. 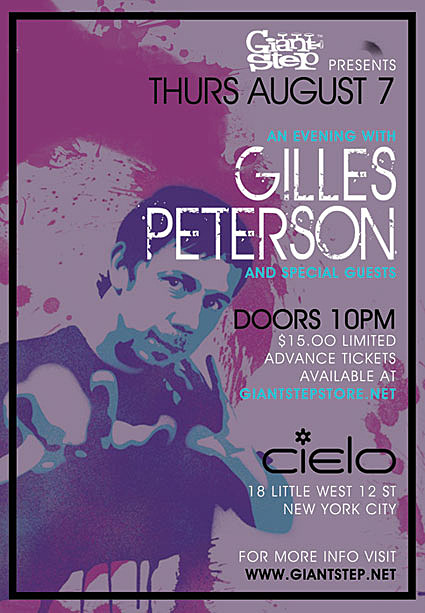 Friday, Saturday, and Sunday stuff will be on its way provided I make it through Soulwax - I hope you do too!
-Showtrotta