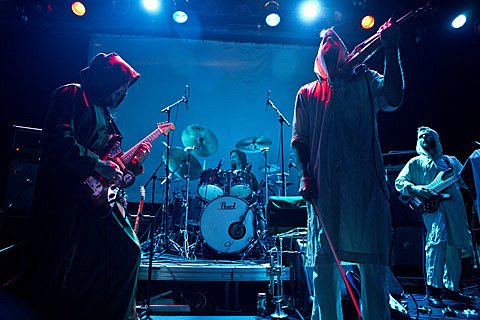 Instrumental experimenters Secret Chiefs 3 will be taking to the road in October. Trey Spruance and company will follow a September residency at London's Corsica Studios with a full slate of North American dates. The tour gets moving in Calgary, Canada on October 2 and ends with an extra spooky show on October 31 in Denver, Colorado. In addition, the mystics will make two stops in New York City. The first is on October 21 at Le Poisson Rouge. Tickets are available now. The second is the very next day, October 22 at Saint Vitus. Tickets for that show are also available.

Secret Chiefs 3 toured with Goblin in October of 2013 and released the second part of the Book of Truth trilogy, Book of Souls, Folio A, in November. When the band played US dates in February, their lineup consisted of Trey Spruance, Timba Harris, Toby Driver, Matt Lebofsky, and Ches Smith. No word yet on the configuration on this go around, though Spruance has got quite the group of alums to choose from.