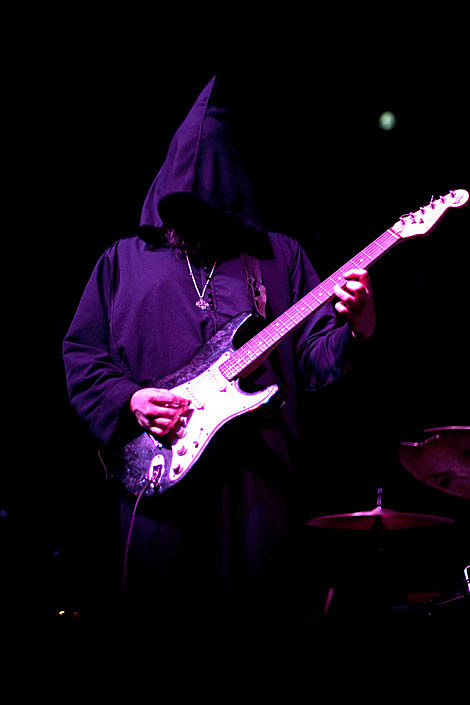 Secret Chiefs 3 recently played the Oddity Faire at Terminal 5 with Les Claypool, Saul Williams, and O'Death, and will be back in NYC again on May 30th, this time tackling Music Hall of Williamsburg. Tickets are now on sale.

Judging by the above photo and the fact that sunn 0))) collaborator Eyvind Kang is currently a member, the SC3-unfamiliar might think that the band dips their toes in the same pond as Stephen O'Malley and Greg Anderson. Not so. Although the experimental spirit of sunn 0))) is present, SC3 has more in common with mastermind Trey Spruance's other projects, Mr Bungle and Faith No More:

Secret Chiefs 3, also known as SC3, is a group of musicians led by composer and producer Trey Spruance, former guitarist of Mr. Bungle and Faith No More. Their studio recordings and tours have featured different line-ups, as the group performs a wide range of musical styles including surf rock, Persian, Arabic, Indian, death metal, film music, electronic music, and various others...

Spruance formed the band in the mid-nineties with fellow Mr. Bungle members Trevor Dunn on bass and Danny Heifetz on drums [ed: Trevor has since moved on]. Some of the many musicians who have since recorded or toured with SC3 are violinist Eyvind Kang, percussionist William Winant, former Mr. Bungle member Clinton "Bär" McKinnon, and Estradasphere members Timb Harris, Jason Schimmel, and Tim Smolens.

Secret Chiefs 3 dropped Xaphan: Book of Angels Volume 9 on Tzadik (John Zorn's label) in May of 2008.

sunn 0))) drop Monoliths & Dimensions in May and will be featured on The Limits of Control soundtrack.

No more SC3 tour dates yet. Some videos below...