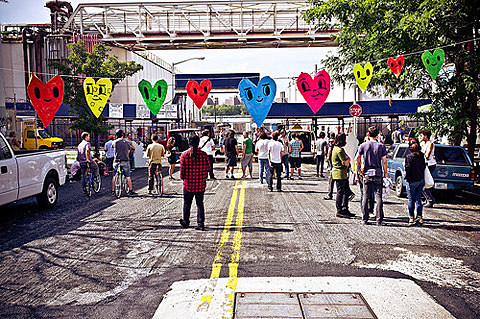 Cult of Youth (who played the recent final Monster Island block party) will return to the space to join forces with King Dude (aka the goth-y folk project of TJ Cowgill of Book of Black Earth) and Alice Cohen to play 9/22 at Live with Animals, one of the last shows scheduled for their current space, 210 Kent Ave. But don't worry, Secret Project Robot has already secured their future:

Following the end of their lease, Secret Project Robot will be moving to 389 Melrose Street. The art gallery and peformance space's new home will be smaller than its current location, but is adjacent to a 4,000-square-foot lot, which will probably be quite nice come next summer. Moving with them are experimental art rock band Oneida and the Live With Animals gallery. Venue Monster Island Basement will be closing. -[BushwickBK.com]

The new space has a few events coming up, including 10/20 with KNYFE HYTS, 10/24's "Allison Awesome Birthday Party" featuring Call of the Wild (ex-Awesome Color), a 10/28 Pterodactyl Record Release party, "The most insane scary Halloween Art Installation and Party" on 10/29 featuring Jonathon Toubin, and 11/19 with Section 25 and Stereograph.

There are still a few other shows left at the old space, including TONIGHT (9/19) with performances from Dan Friel, Alexico, Netherfriends as part of a FREE show that kicks off at 8PM. The final dates for the old space go down on 9/30 and 10/1, with Regal Degal, Royal Baths, Total Slacker, Hume, and Quilt hitting on 9/30 and a tentative "MONSTER ISLAND REQUIEM AUTUMNAL UNAMPLIFIED ACOUSTIC BBQ" scheduled for the following day.

Cult of Youth will also play Saint Vitus on 10/1 with Lost Tribe, Anasazi, and Dead Reich. The show is the record release show for Lost Tribe's LP which is out now on Sean of COYouth's label Blind Prophet Records. Stream some material below.