Dark Was the Night (finale) (photo by Natasha Ryan) 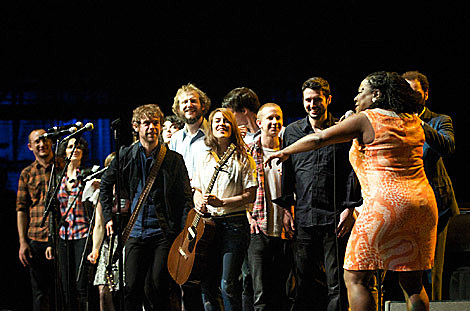 Last night's Dark Was the Night show was amazing. My only disappointment was that David Byrne didn't come back to sing with Sharon Jones during the finale/encore (he sang with almost everyone else!). He actually watched the encore from the audience. And by the encore I mean, after Sharon Jones and the Dap Kings finished their set, most of the artists (Feist, Bon Iver, The National, Dirty Projectors, My Brightest Diamond, etc...) on the bill came back on stage to do a We-Are-The-World/Kumbaya/folkie/feel-good traditional group, acoustic sing-along of Pete Seeger's Woodie Guthrie's "This Land is Your Land". One of the Dessners introduced the song by saying they thought it would be nice to do it in honor of Pete Seeger's 90th birthday and jokingly thanked everyone for coming to Radio City instead of Madison Square Garden.

You knew something else was going to happen because The Dap Kings, though not part of the sing-along, were still lingering in the background with their instruments. Half-way through the song, Sharon Jones popped on stage and walked right in front of all of them. The crowd went nuts. Sharon grabbed a mic and they all stopped playing. She said something like, "I don't want to burst y'all's bubbles, but we're going to do our version". And they did. It looked something like the picture above. It sounded (and looked) something like the video below.

Many more pictures and a review of both of last night's big shows are coming soon NOW POSTED.

This Land is Your Land @ Radio City Music Hall

same song 2 years ago at Amoeba...