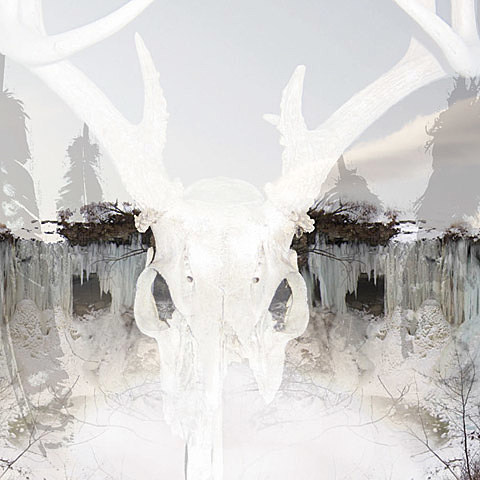 Seidr (not to be confused with, or spelled the same as, the meal you may have eaten this week if you celebrate Passover) came on my radar in multiple directions - via Seidr vocalist/guitarist Austin Lunn's black metal project Panopticon (whose work is also worth a look, and was highlighted here previously), and via two of Seidr's previous releases: a demo which is available for free, and their Cortez The Killer EP (which does in fact contain a cover of the Neil Young song of the same name).

Both the demo and EP toil in inching heavyweight doom, but add soaring shoegaze-y melody atop the darkness reminding me of faves like Asunder, Thou and Wolves In The Throne Room in one fell swoop. Their live show, which took place at Acheron in January with Lake of Blood & Falls of Rauros, was similarly impressive.

Seidr is welcoming a new LP now, For Winter Fire, from Bay Area label Flenser Records due in North America on May 24, and in Europe on June 7. That's the cover art above. For Winter Fire sees the doom band dipping their toe into post-rock, black metal, shoegaze, drone, thrash, and many different genres over the record's 73 minutes. Check out the first track from the LP, "A Vision From Hlidskjalf" which makes its debut in this post and is streaming belob. What begins with majestic post-rock beauty eventually evolves into a triumphant and emotional doom epic. For fans of Alcest, Agalloch, Thou, Mogwai (who are unfortunately not in NYC this week), Envy, and anything that straddles the line between pensive and punishing. Preorder For Winter Fire now.

Austin Lunn is also prepping a new demo due in June and has prepared a video teaser for its release. Check out the Kólga teaser, as well as the For Winter Fire teaser and the full song stream below...

--
Seidr - A Vision From Hlidskjalf