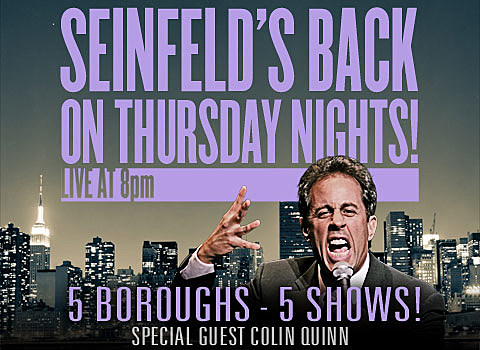 Love it or shove it, Jerry Seinfeld is one of the most important comedians of my lifetime (I'm 35). Growing up, 'Seinfeld' was one of my favorite shows and I saw every episode from all 9 seasons the evenings they premiered. Even now, there's an hour of 'Seinfeld' on beginning at 7:00pm every night and if I'm home I am watching that shit. Nowadays, it's easy (and sort of fashionable) to disregard Seinfeld, his comedy, and his TV show as being dated, too white-centric, and corny. Fuck that noise though. I love it. One of my many maxims is that people who try to make you feel like shit about the comedy you like and what makes you laugh are a waste of your time. Anyone dogmatic about what is and isn't funny is a douche bag. A friendless, tedious, insufferable, miserable wretch of a douche bag. When something makes you laugh, it's a completely unconscious reaction and you have absolutely no control over it. So own it.

When BV announced that Jerry Seinfeld will be doing a stand-up show in each of the 5 boroughs in late October and early November, I'm not going to lie; I was f-ing pumped (even though tix are out of your pal Klaus' price range)! Comedy legend Colin Quinn will be opening all these shows which actually makes a lot of sense. For one thing, Quinn is a native New Yorker (born in Brooklyn) and has been no stranger to goggle boxes and movie screens all over America since 1987. More importantly though, Jerry Seinfeld directed Colin's superb one-man show Long Story Short. HEADS UP, though. Turns out, presales, and in some cases on-sales, begin VERY SOON. Like, TODAY!

Presales and on-sales actually vary from borough to borough, here's the rundown:

His October 11 show at the Concert Hall at the Lehman Center for the Arts in the Bronx go on sale today at 10am.

His show on October 4 show at the Beacon Theater goes on presale today (password THURSDAY) at 11AM. General on-sale is Monday, July 30 at 10AM.

His November 8 show at the Walt Whitman Theatre at the Brooklyn Center for the Performing Arts in Brooklyn are on presale now (password: BCJS12).

His October 18 show at The Colden Auditorium at the Kupferberg Center for the Arts in Queens go on sale Monday, July 30 at 10AM.