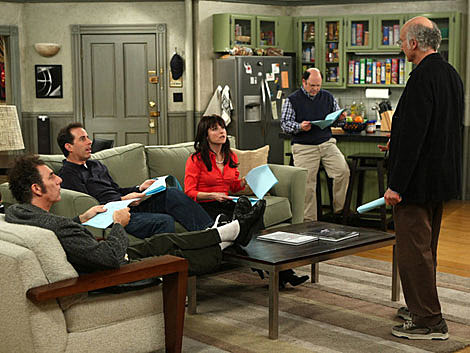 About 2 million viewers tuned in from two telecasts Sunday evening, putting the total number of viewers 24% higher than last season's finale in 2007.

"Curb" is averaging a gross audience of 5.1 million viewers this season when you combine linear airings, DVR and HBO On Demand, up 36% from last season. [Hollywood Reporter]

If you missed it, check out the video featuring Michael Richards, Jerry Seinfeld, Julia Louis-Dreyfus, Jason Alexander and co-creator Larry David, below...

Only Larry David could have gotten away with what he just pulled off on Curb Your Enthusiasm. That's not just praise for his ability as a brilliant sitcom writer and improviser -- it's also a plain fact. After Larry and Jerry Seinfeld ended Seinfeld when it was the top-rated show on television, Larry, the behind-the-scenes co-creator, went out on his own. He created Curb, playing an exaggerated version of himself: Larry David, the guy who co-created Seinfeld, made skillions of dollars, but still found endless irritations in everyday life.

He was the first of the Seinfeld gang to succeed in a new venture, and the premise set him up, years later, to attempt the unthinkable: to bring everyone back for a Seinfeld reunion show. He and Jerry would never think of doing it for NBC, their old bosses, for real. That would be too ordinary. But to do it for HBO, as part of a complicated plot that has the TV Larry agreeing to do an NBC reunion special only so he could get back together with his estranged wife -- that's not only different. It's perverse. [NPR]

In related news, I went to see the Fela! musical the other night (11/19 - a few days before the reunion aired), and Michael Richards was in the audience! At first, I just thought it was an awesome Seinfeld celebrity sighting. By intermission I realized how funny it was that my first encounter with Michael was not only the first time I really thought about him since he was last making headlines (not the first thing I remembered about him when I saw him), but was at a play whose themes include Black Power. The incident I'm referring to is parodied in the reunion (video above).