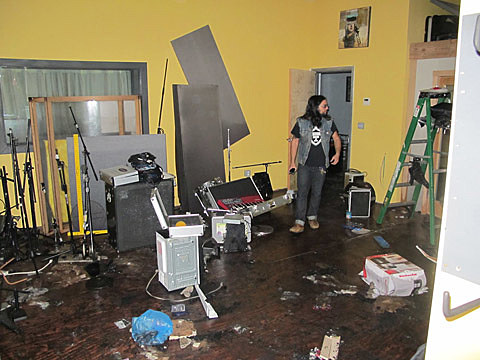 Come celebrate 10 years of Seizures Palace Recording in Brooklyn while helping out some neighbors heavily affected by Hurricane Sandy... Seizures Palace was started in 2002 in the Old American Can Factory by Jason LaFarge. Albums recorded there include those by Swans, Khanate, Akron/Family, Chicha Libre, Mighty High, Angels of Light, Ovo, and many more.

Civil Defense/Translator Audio/South Sound was a recording/rehearsal studio complex opened this year down the street from Seizures Palace by a collection of good people who really care and believe in what they are working toward. The surge from Hurricane Sandy completely flooded the complex and all was lost. They need help.

One recording studio helping another. That's what its all about. Come and party with Sightings, Gnaw, Heldin, Martin Bisi, Pants Exploder and Kevin Omen on  Friday (12/7 at Littlefield). Tickets are on sale. Alternatively, or in addition, you can donate to Civil Defense/Translator Audio/South Sound here.